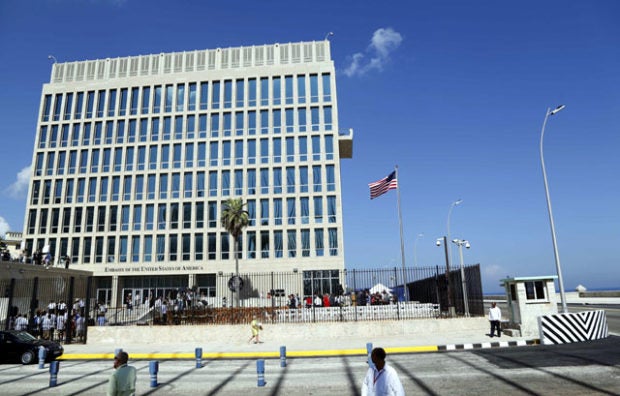 In this photo taken Aug. 14, 2015, a U.S. flag flies at the U.S. embassy in Havana, Cuba. At least 16 Americans associated with the U.S. Embassy in Havana suffered symptoms from attacks on their health in Cuba that have still not been explained, the United States said Thursday, Aug. 24, 2017. AP

Washington, United States — No fewer than 16 Americans were hurt in what has previously been dubbed an acoustic attack on the US mission in Cuba, the State Department said Thursday.

Officials are probing a series of incidents dating back to September last year in which diplomats are thought to have been hit with a mystery sonic weapon.

The “unprecedented” attacks came to light last month when Washington warned Cuba it would be held responsible for the safety of US personnel in Havana.

But on Thursday, State Department spokeswoman Heather Nauert gave the first indication of the scale of the incident, which has threatened slowly improving ties.

“We can confirm that at least 16 US government employees, members of our embassy community, have experienced some kind of symptoms,” she said.

Late last year, US embassy staff and at least one Canadian began to feel the effects of what Secretary of State Rex Tillerson called a “health attack.”

US officials have said those hurt appeared to have been targeted by some form of previously unknown acoustic assault, but have not blamed Cuba directly.

Cuba has insisted it has no knowledge of any attack and is working to “clarify the facts of the situation.”

No details of the injuries have been released, but a CBS News report suggested at least one victim suffered what amounted to “brain damage.”

Nauert confirmed that the 16 cases she was referring to were all US citizens connected to the mission, but was not sure if any were family members of staff.

Some were evacuated to Miami for treatment in US hospitals, others were cared for by American doctors who traveled to Havana to work at the embassy.

Separately, Canada has said one of its diplomats posted to Havana is being treated for hearing loss.

In May, the US ordered two Cuban diplomats to leave their recently reopened embassy in Washington and return to Havana, without publicly saying why.

It is now known that Washington had alerted the Cuban government to what its foreign ministry dubbed the “alleged incidents” as far back as February 17.

But US officials made no public complaint until just last month when Tillerson warned that Cuba must help investigate and prevent further attacks.

Nauert said on Thursday that the incidents do now appear to have ended, but that investigations are ongoing to find the culprits.

Relations between the United States and Cuba were restored by then president Barack Obama and his counterpart Raul Castro in 2015 after a half-century.

But tensions mounted again after Obama’s successor Donald Trump, who won many Cuban American votes by promising a tough line, rolled back detente.

In June, Trump tightened rules for Americans traveling to Cuba, banned ties with a military-run tourism firm and reaffirmed the existing US trade embargo.

The US embassy was closed in 1961 at the height of the Cold War when diplomatic relations broke down between Washington and Fidel Castro’s revolutionary regime.

The mission reopened as a “special interests section” rather than a full embassy under an agreement between Castro and US President Jimmy Carter.

But the US diplomats were hardly made welcome.

Anti-American propaganda was displayed around the compound, which Cuba saw as a base for fomenting opposition sedition.

American diplomats in Havana and their Cuban rivals in Washington both regularly complained of harassment or heavy-handed surveillance — but never of sonic attack.