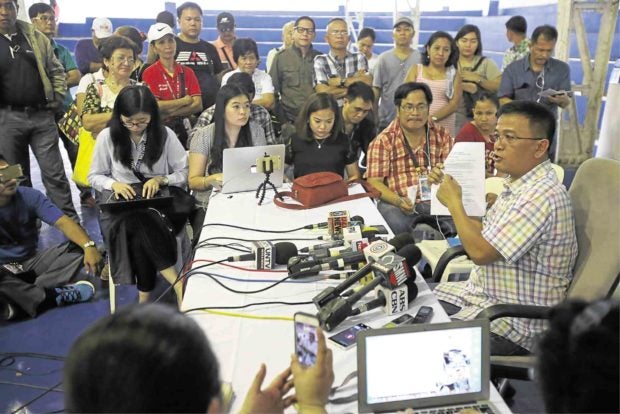 TAYTAY, RIZAL—A day after Sen. Panfilo Lacson named him as among the corrupt officials in the Bureau of Customs (BOC), outgoing Customs Commissioner Nicanor Faeldon fired back at Lacson, accusing the senator and his son of cement smuggling.

Faeldon, in a press conference near his home in Barangay Dolores in Taytay, Rizal province, said the senator’s son and namesake, Panfilo Lacson Jr., was the managing director of Bonjourno Trading, a company that the customs commissioner said was cited as the “No. 1 smuggler of cement in the country” by the Cement Manufacturers Association of the Philippines (CeMAP) Inc.

Lacson, however, said Faeldon should have filed charges against his son if he had a case against the latter.

“If my son is guilty or he is into smuggling, I will be the one and not (Faeldon) to file a case against him,” Lacson said in a news conference, which he called after the resigned BOC chief made the public accusations.

He said his son had denied any wrongdoing.

Faeldon said that during his one-year stint at the BOC, Bonjourno brought in 67 shipments of cement, 63 of which were valued at P4.6 billion.

He said one of his staff members, a brokerage exam topnotcher, discovered that Lacson Jr.’s company attempted to undervalue by 50 percent the freight cost of at least four shipments.

Faeldon said Lacson’s son declared a freight cost of $8 per metric ton when the prevailing market price was between $16 and $20.

“We discovered the smuggled shipment during our first 12 days in office at [the Bureau of] Customs,” he said.

“In a span of a week, the company managed to bring in three shipments worth a total of P106 million. How is that possible for a company whose starting capital is only P20,000? These are only initial three ships,” Faeldon said.

“Can he afford this? Did he pay the right tariff? The right tax?” he asked, adding that Bonjourno also submitted fake documents to try to justify the amount that it was insisting to pay.

“Of course, this is smuggling,” he added.

But Faeldon said the four shipments were eventually released after the company paid the correct freight charges.

Lacson said there was no smuggling because cement was not subject to customs tariff and duties but was only covered by the value-added tax, which is collected by the Bureau of Internal Revenue.

“What Faeldon is saying that (the tax for freight cost should be) $16 per ton. That’s too high. One friend who is exporting nickel to China, which is supposed to be more costly, the freight (cost) is $8-$9 per ton,” the senator said.

Faeldon said he was still looking into Bonjourno’s 63 other shipments to determine if the company had paid the correct freight charges.

The younger Lacson, he said, also went to his office several times and allegedly tried to bribe his staff.

“Ping Lacson mentioned players at the BOC. My question to him: ‘Are you a player (in  smuggling)? Is your son a player? Is he your dummy?’” Faeldon said.

The senator said he was not a dummy for his son, noting that if his son had indeed made so much money, he would have finished the construction of his house, which began two years ago.

Lacson said he asked his son about Faeldon’s claim that he was delivering money to the commissioner’s office.

“He said he had  not done so at any time, he had not met Faeldon. He had absolutely no reason to bribe Faeldon or the customs bureau. That’s a big big lie,’ he said,” Lacson said.

Faeldon said the senator seemed to know everything at the BOC. “Does he know this? Or are you the one behind this?” he said, referring to Lacson Jr.’s alleged smuggling activities.

“How much tax are you paying? You brought in tons of cement. If those do not match, then you are a smuggler, Senator Lacson, unless you tell me you do not know Panfilo Lacson Jr.’s activities,” he said.

“If you deny knowing these, you know nothing about Customs. You are a liar,” Faeldon added.

Faeldon said Lacson’s accusations against him was meant to remove him and his appointed men from the BOC as they were closing in on Bonjourno’s illegal activities.

“They do not want the truth to come out. They want us all out, the six of us,” he said, referring to the former military officers that he had recommended to key posts in the BOC who were also named on Lacson’s list of alleged corrupt Customs officials.

Faeldon also accused Lacson of using the issue to launch another bid for the presidency.

The outgoing customs chief called on the Senate blue ribbon committee, which is investigating the entry to the country of a P6.4-billion “shabu”( crystal meth) shipment from China that passed through the BOC, to also investigate Lacson and his son.

Faeldon cited pieces of evidence, including bank certificates and a letter from CeMAP, which listed Bonjourno as among the four importers “still undervaluing their freight rates.”

“Let us investigate this because this is smuggling of cement by a high-ranking government official,” he said.