Calls for justice for youngsters killed in drug war mount 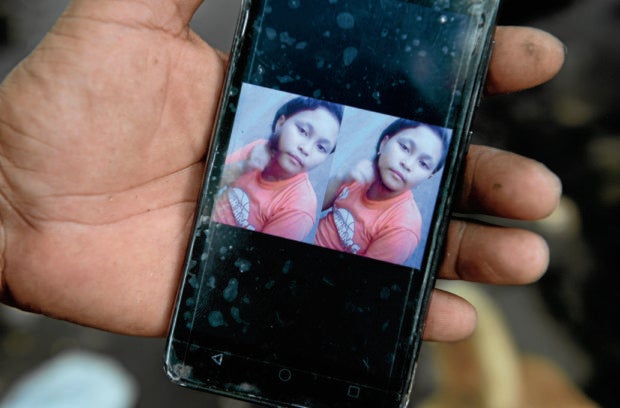 Kristine Joy, 12, died after she was hit by a bullet meant for a suspected drug dealer in Biñan City, Laguna province.—NIKON CELIS

Public outrage over the murder of 17-year-old Kian delos Santos has prompted calls for justice for other youngsters killed in the Duterte administration’s war on drugs.

Investigations of these cases, perpetrated either by lawmen or vigilantes and hidden from media spotlight, have grounded to a halt for a host of reasons, like fear of reprisals, lack of witnesses and plain lack of interest by local authorities, according to the Commission on Human Rights (CHR).

Kristine’s pictures share a small table with a broken stove, empty tin cans, uneaten crackers and wilted flowers. Like an altar with a crucifix and rosaries hanging on the picture frames, the table occupies a corner in the family’s 12-square-meter home occupied by the girl’s coffin during her wake six months ago.

A stray bullet hit Kristine in an attack that killed Allan Fernandez, a suspected drug dealer in their community. It happened in a church compound where the girl was attending a dawn Mass with her family, four days before Christmas.

“I still remember her watching TV from morning till noon. She would sit around with her cousins, teasing her older brother. She was a cheerful girl,” said Sailog, 40, a seasonal construction worker.

Sailog said he had yet to hear from the police about their inquiry into his child’s death.

The war on drugs has claimed the lives of several thousands in police operations or vigilante violence.

In the Calabarzon region (Cavite, Laguna, Batangas, Rizal, Quezon), police records as of June showed 373 drug suspects were killed allegedly while resisting arrest and engaging policemen in a shootout.

Philippine National Police Director General Ronald dela Rosa has commended the Calabarzon police for carrying out the most number of antidrug operations in the country that had resulted in the arrest of 15,580 suspects and the surrender of 144,726 others.

“We too were surprised by what was happening. We were not ready for that,” Dr. Rio Magpantay of the Department of Health said of the number who had surrendered in an area with little facility for drug treatment.

There was another youngster killed in Cebu province.

Wilson Batucan recalled that his 7-year-old son Niño was watching television in their house in Barangay Cansaga, Consolacion town, last Dec. 3 when he was killed by a stray bullet fired by a group of bonnet-wearing men who were chasing a teenage boy accused of selling drugs.

The father cried for justice, claiming that his son’s killers were policemen.

Batucan himself was killed on March 8 in an attack by still unidentified gunmen while he was about to park his motorcycle outside his house.

He had confided to his wife before the incident that he had turned down an offer to settle his son’s case in exchange for money.

His wife, Marilou, 45, said she wanted justice for her husband and son but had decided to remain silent to protect her other children and relatives.

Many families of those killed by unknown assailants and police officers in the war on drugs have chosen not to file any complaints for similar reasons, according to CHR’s Edgar Luis.

“All the investigations we are doing are motu proprio (by the agency’s own initiative) because no one is interested or willing to file a complaint or seek an investigation,” Luis said.

The CHR is investigating 21 cases of suspected extrajudicial killings in Western Visayas and 59 cases in Central Visayas involving either policemen or operatives of the Philippine Drug Enforcement Agency. These cases have been elevated to the Office of the Ombudsman.

One of the cases involved the killing of Jerald Inesola, 22, who was picked up from his house in Cebu City and was later killed in what the police claimed was a shootout on July 23, 2016.

The CHR has filed a complaint in connection with the case against SPO2 Renante Nioda and PO2 Arnold Cabildo at the Office of the Ombudsman.

Nicolasa Inesola, 72, a rice cake vendor, said the family was dismayed by the snail-paced investigation. She and her daughter had traveled to Manila to pursue the case.

“We spent for it, but we just could not travel to Manila regularly because the fare was expensive,” Inesola said.

“I want those two policemen to rot in jail. How could they kill my grandson? They don’t have any right to do so even granting that he committed a mistake,” she said as tears welled up in his eyes. —With reports from Nestor P. Burgos and Leo Udtohan

Read Next
3 witnesses to testify on Kian killing in Senate today
EDITORS' PICK
We Can’t Guarantee You’ll Win a P20 Billion Jackpot, But We Can Help You Try
Foreigners prepare to flee as China virus toll tops 100
SM continues to send relief assistance to remote towns in Batangas
Best Gift Ideas in the Philippines
Sex on the menu for Pogo workers
First female commodore named
MOST READ
Sex on the menu for Pogo workers
‘Normal people doing normal work’ need not wear mask – WHO official
Kobe Bryant gear pulled out of Nike online store in wake of his death
Lacson on VFA impact study: ‘Better late than never’
Don't miss out on the latest news and information.