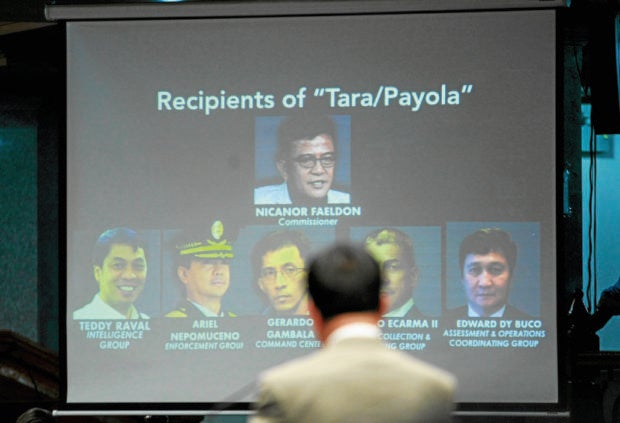 Biggest payola recipients at Customs areNicanor Faeldon and his five deputy commissioners,
according to Sen. Panfilo Lacson. —PHOTOS BY RPSANTOS/PRIB 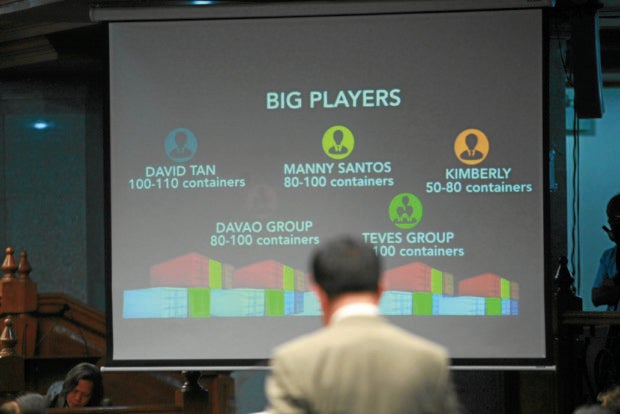 A “welcome gift” of P100 million awaited Nicanor Faeldon when he took over the Bureau of Customs (BOC) at the start of the Duterte administration in July last year, Sen. Panfilo Lacson said on Wednesday.

“Loud whispers in the four corners of the BOC compound tell of a P100-million  ‘pasalubong’ to the newly installed commissioner, a quarter of which, or P25 million was retained as a finder’s fee by his middleman named Joel Teves,” Lacson said in a privilege speech titled “Kita kita (sa Customs) [I see you at Customs].”

Teves was among the 44 alleged bribe givers, or “players,” that Lacson identified at the BOC.

Lacson said Faeldon was swallowed by the system after a year in office, as he led officials and employees in receiving payoffs through a “tara” (payola) system that has been in place in the agency for a long time.

“And for the devils, the BOC is heaven — a heaven that is a haven for crooks, criminals, malefactors and faeldons … sorry, I meant felons,” the senator said.

President Rodrigo Duterte announced on Monday that he had accepted the resignation of Faeldon and that he had appointed Isidro Lapeña, head of the Philippine Drug Enforcement Agency, as his replacement.

Faeldon called for a third-party investigation into the issues hounding the BOC as he denied Lacson’s allegations that he was among those who received bribe money at the agency.

“I have not asked anybody to collect tara for me nor have I accepted any tara from anybody,” Faeldon said in a text message.

“The country will appreciate if a third-party investigation by a competent body will be conducted so that justice will be served,” he said.

As he had promised, Lacson delivered his privilege speech identifying the alleged bribe givers, collectors/bagmen and the recipients at the BOC based on the tara list he compiled and “carefully vetted and cross-matched.”

He said leading the pack was no less than Faeldon and his five deputy commissioners—Teddy Raval of the Intelligence Group, Ariel Nepomuceno of the Enforcement Group, Gerardo Gambala of the Command Center, Natalio Ecarma III of the Revenue Collection Monitoring Group and Edward James Dy Buco of the Assessment and Operations Coordination Group.

“The tara system, Mr. President, shows that there is systematic corruption in the bureau. In fact, with almost every office and official receiving their share of tara, the bureau can give the Mafia stiff competition,” Lacson said.

Lacson said the P6.4-billion “shabu” (crystal meth) shipment that passed through the BOC and ended up in a warehouse in Valenzuela City “sounds more like the inspiration behind the hit movie title,  ‘Kita Kita (I Can See You).”’

He said the shipment was “smuggled under the noses or through the indispensable participation of BOC officials.”

“We can see the incomes of several customs officials,” Lacson said, pointing out that during the Senate blue ribbon committee inquiry into the controversy, “fixer” Mark Taguba named BOC officers and bagmen he bribed, but “did not spill all the beans.”

Lacson recalled that in one of the hearings, Faeldon said he was aware of the tara system but he could not investigate it because he was only able to form an investigative team six months later.

But it was a lie, according to Lacson, saying that Faeldon appointed Gambala and other technical assistants as early as July last year.

Having the backing of Mr. Duterte, Faeldon should have started to clean up the agency by eliminating the tara system but he was eaten up by it, “effectively tolerating and even promoting the impunity of corruption.”

“How can we stop the importation of illegal drugs at the BOC if the graft activities of its officials and personnel and the corrupt system persist in the seaports and airports?” he said.

Lacson said his office was contacted by BOC officials, employees, brokers and even a civic-minded individual who had been gathering information on the tara system at the BOC or how much an office or an official was getting per container. (See table.)

“From this, the share of each office or person within the bureau ranges from a low of P200 to a high of P15,000 per container. Believe it or not, officials from the top offices of the bureau down to those who monitor the  ‘gates’ and X-ray (machines) have their share in the tara,” Lacson said.

He listed the 44 bribe givers and 21 collectors/bagmen.

Lacson also listed the standard tara for BOC offices, and for the Manila International Container Port and the Port of Manila.

Lacson also identified the “big players” at the BOC who he said were enjoying the quick release of their shipments. (See list.) 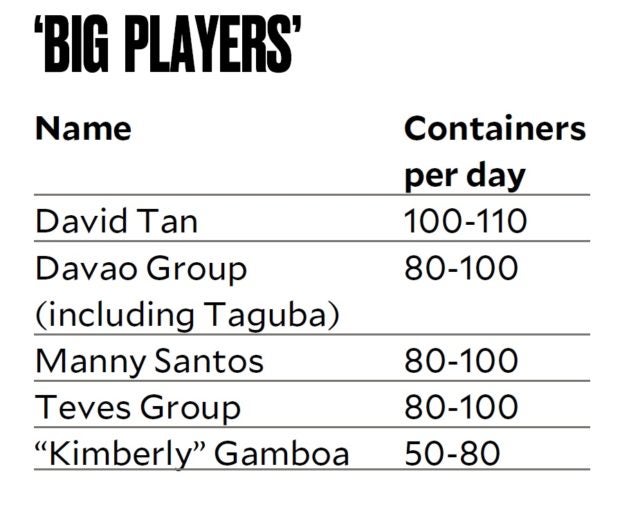 Lacson said he hoped Lapeña whom he knew would not be eaten up by the system.

“His highest calling at the moment is to descend on the gates of hell and destroy the brazen corruption within the country’s most corrupt agency,” he said.

During the interpellation, Sen. Cynthia Villar noted that David Tan and Manny Santos, who were on Lacson’s list, were investigated in 2013 by the Senate for rice smuggling and Lea Cruz, for garlic smuggling in 2014.

Lacson said Faeldon and other BOC officials could be liable in connection with the smuggling of shabu.

“Their eyes have been covered with money and they no longer think whether drugs or contraband are being released,” Lacson told Sen. Bam Aquino who asked questions about the exposé.

Sought for comment, Gambala said: “God knows everything that I do; there’s nothing that I can hide from him. That’s why I submit to his will and hold on to his promise that he will never leave me nor forsake me.” —WITH A REPORT FROM TINA G. SANTOS