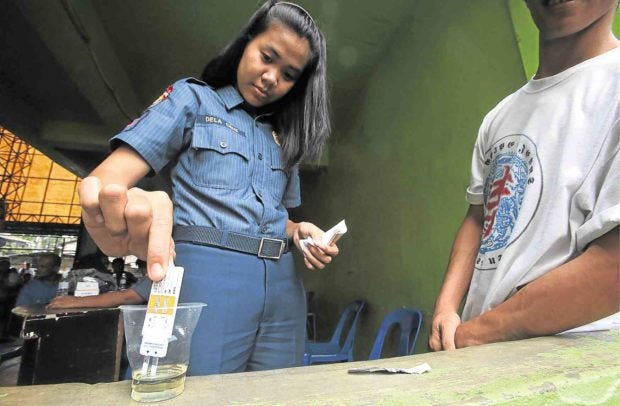 A policewoman conducts an on-the-spot drug test in Payatas, Quezon City, part of the Batasan police’s initiative to weed out the use of illegal substances in the area. —GRIG C. MONTEGRANDE

The Quezon City Police District (QCPD) has decided to stop conducting a house-to-house antidrug campaign in Payatas in which residents were asked to subject themselves to an on-the-spot drug test.

In the face of criticism from human rights advocates and the general public, Chief Supt. Guillermo Eleazar, QCPD director, maintained on Wednesday that the tests were being done voluntarily.

An earlier report from Vera Files showed Batasan policemen knocking on doors in Barangay Payatas, armed with a list of names and do-it-yourself drug kits. A plastic strip, when dipped into a cup of urine, would change color if the suspect had taken illegal drugs recently.

In an accompanying video, police officers were shown asking residents to take the drug test. In cases where the people they were looking for were not at home, the suspects’ relatives — including a grandmother — were asked to take the test in their stead.

The police campaign which has been going on since June drew a lot of flak in social media and from several human rights groups.

Even in detention, Sen. Leila de Lima slammed the process, saying it was tantamount to harassing poor people.

“This operation is obviously inaccurate and incriminatory because the drug tests are not conducted by accredited people and agency,” her statement read.

The Commission on Human Rights also expressed concern, saying that the practice violated people’s right to privacy and against self-incrimination.

“While they say it is voluntary, our fear is that the people are not in best position to know fully for what purpose it will be used,” said lawyer Jacqueline de Guia, Commission on Human Rights spokesperson.

De Guia also stressed that under the Comprehensive Dangerous Drugs Act or Republic Act No. 9165, drug tests should be done only in accredited clinics with authorized personnel.

In an interview, Eleazar said the approach was not a directive from QCPD administration but an initiative of the Batasan police which is in charge of the largest area in Quezon City.

“I don’t see any problem if this was done voluntarily, but we will have an issue if coercion is involved,” he stressed.

While official results of the drug tests have yet to be tallied, Eleazar said those who tested positive would be recommended for further examination.