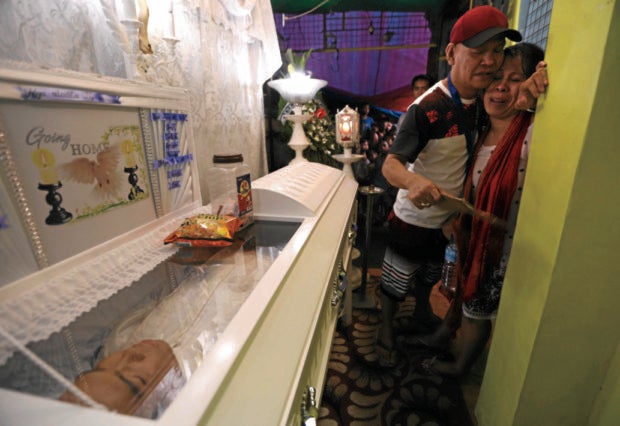 Zaldy delos Santos comforts his wife Lorenza, who arrived from Saudi Arabia, beside the casket of their 17-year-old son Kian Loyd. The boy was killed in a police antidrug
operation in Caloocan City on Tuesday. —LYN RILLON / INQUIRER FILE PHOTO

“There are two gunshot wounds pareho po sa ulo (both in the head). Ang una mismo tenga mismo and yung sumunod that is nasa likod ng tenga (The first one in the ear is exactly in the ear while the other is at the back of the ear), both of those nag exit,” PNP Crime Lab medico-legal officer Dr. Jane Monzon said in a press briefing on Wednesday.

“Left pareho ang entry, parehong lumabas sa right (Both entered the left side and exited to the right),” she added.

The two bullets were shot downward, she said, adding that the minor could have been shot at a distance of more than 60 centimeters away from the tip of the barrel.

There were also no gunshots in his body, contrary to the report of the Public Attorney’s Office that Delos Santos had one gunshot on his back of his body, the officer said.

Monzon said that they were not able to get a urine sample from Delos Santos as the autopsy was conducted after he was embalmed.

Police claim that they fired at Delos Santos after the minor shot at them first during the drug raid on August 16. But witnesses claimed the police account was not true.

The PNP also claimed Delos Santos was a suspected drug runner based on the intelligence information of the police, but later admitted that he was not on their watchlist. JPV