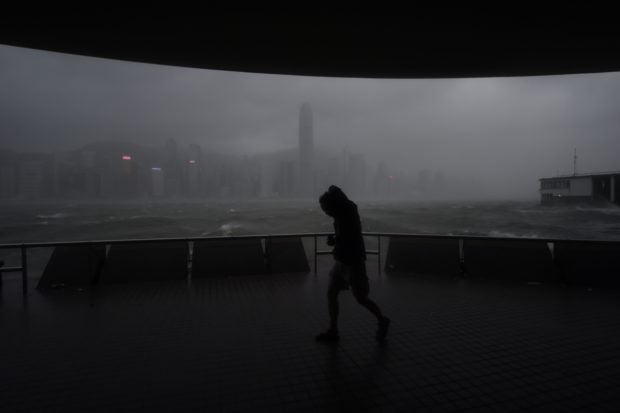 A man tries to walk along the prominade in Tsim Sha Tsui against winds from Typhoon Hato as dark skies hover over the Hong Kong island skyline on August 23, 2017. Heavy rains and driving winds lashed Hong Kong on August 23 shutting schools and the stock market and bringing chaos to the city’s international airport where hundreds of flights were canceled. AFP

Hong Kong, China — Hong Kong raised its highest storm warning Wednesday as Severe Typhoon Hato brought the city to a standstill, shutting down the stock market and forcing the cancellation of hundreds of flights as heavy rain and winds pummelled the territory.

The weather observatory raised the storm warning to the city’s maximum Typhoon 10 signal — meaning hurricane force winds are expected — at 9:10 am (0110 GMT).

It was the first such alert in five years and only the the third time the Typhoon 10 warning has been issued since 1997 when the former British colony was handed over to China.

The observatory also warned of possible flooding and said that sea levels could rise by one meter as the typhoon brought wind gusts of up to 168 kilometers (104 miles) per hour.

The typhoon was expected to edge towards the Pearl River Estuary and to make landfall within around 100 kilometers to the west of Hong Kong in the afternoon.

Hong Kong Airport Authorities said that by daybreak, 420 flights had already been cancelled.

The city’s airport express train line was also suspended while the metro rail and buses operated on a limited service.

Hong Kong is regularly hit by typhoons between July and October but direct hits are rare.
The city saw its strongest storm in 1962 when the eye of typhoon Wanda passed over and gusts of 284 kilometers per hour were recorded.

Since then, Hong Kong has adapted to typhoons, including making sure its highest commercial skyscrapers can sway in the wind, and due to the extensive lockdown procedures they now rarely cause deaths.