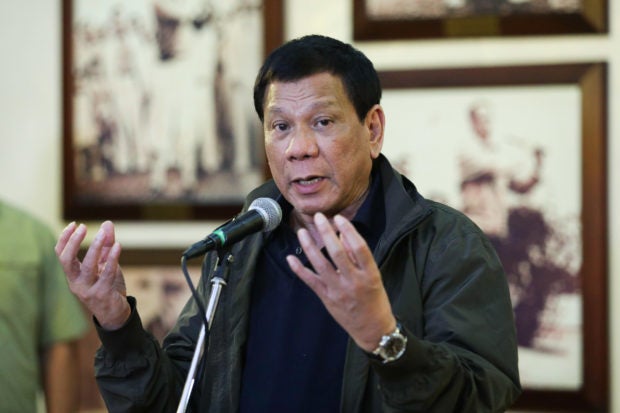 President Rodrigo Duterte on Monday night dared critics of the government’s war on drugs to stage an uprising against him.

“Go ahead. I am waiting for that actually. So that there will be a change of President and everything. And perhaps the new generation will come up with something that is — a government that is really working,” he told a press conference as protests mount against the killing of a 17-year-old student during an antidrug operation.

The President also said he would readily give up power to the military if Armed Forces of the Philippines chief of staff Gen. Eduardo Año and other leading generals ask him to step down.

“A coup d’état? That’s not necessary. All Año has to do, or the commanding generals of the Armed Forces, all they have to do is to come here or tell me, ‘You step down.’ I will give it,” Mr. Duterte told a late night press briefing in Malacañang on Monday.

“If the military wants to follow me, then follow. If not, then tell me. Maybe you can do better,” he added.

The President said there was no need for the military to fight against the Presidential Security Group, which is tasked to ensure the safety of the President and his family.

“They’re all soldiers. They were classmates at the PMA (Philippine Military Academy). Why would you kill each other? Just say it if you want it. You want a junta? Go ahead and I will swear them into office,” he said.

Mr. Duterte made the comments after some of those who joined Monday’s protest actions to condemn the killing of drug suspect Kian Delos Santos used the Filipino word “himagsikan” or revolt to describe their protest.

“Let’s have an upheaval. But since I am in government, we will really be enemies. But do it. I will be glad if you do it. Upheaval? You want to war against government? Go ahead,” the President said.

“Do it. I will be glad if you do it because actually the system here is rotten and government also,” he said.

On Monday, protesters held mass actions in Caloocan City, where Delos Santos was killed, and at the Edsa People’s Power Monument in Quezon City to protest the death of the student who was allegedly executed by policemen.

“I am encouraging you to take to the streets. Everybody… If you want that, go ahead. You have my blessing. Nobody will stop you in the streets,” Mr. Duterte said.

“But if you take violence as your option, I said go ahead, and let us find out… If I find or found out later that I am the only one defending the government, then I would be happy to go down,” he added.

“There’s no problem… I have no illusions about staying for five years,” he added.

On Tuesday, the Patriotic and Democratic Movement (Padem), a group that claims to represent soldiers and policemen called for Mr. Duterte’s ouster for betrayal of public trust, allowing China to occupy the West Philippine Sea, and inciting the police to commit extrajudicial killings.

Read Next
AFP affirms support for Duterte amid ouster calls
EDITORS' PICK
Unleash the photographer in you this World Photography Day with vivo smartphones
Palace warns sugar hoarders after raid on Pampanga warehouse
Look Through: The fate of impounded stray dogs
What to watch out for when selecting a video surveillance solution
House energy committee chair Arroyo bats for cheap electricity
Metro Manila’s COVID-19 cases on downward trend, but surge not over — OCTA
MOST READ
LOOK: Miel Pangilinan dazzles in glittery pre-debut shoot
Man abducted in Batangas gasoline station, found dead in Quezon
August 19 a special non-working holiday in Quezon City
Palace warns sugar hoarders after raid on Pampanga warehouse
Don't miss out on the latest news and information.