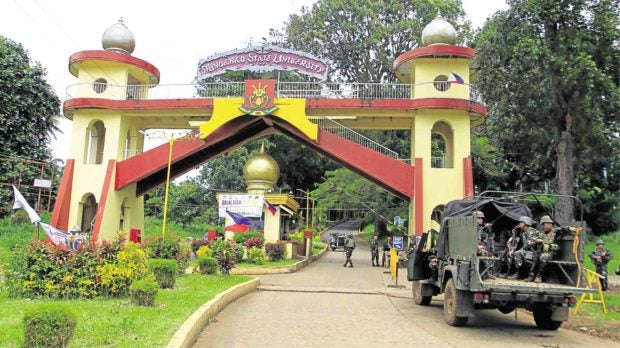 Soldiers are stationed at the gate of the Mindanao State University campus in Marawi City to ensure that students are safe while government troops battle the remaining terrorists holed up in the city. —RICHEL V. UMEL

MARAWI CITY — Hundreds of students — some of them with parents in tow — arrived at the main campus of Mindanao State University (MSU) here on Tuesday as the state-run institution opened for the first time since fighting broke out between government troops and the Maute terror group three months ago.

Among those who attended the first day of classes were children of evacuees who had to be transported by 12 buses contracted by the military and the provincial government of Lanao del Sur from Iligan City.

At least 8,000 students had enrolled for School Year 2017-2018 at MSU in Marawi, site of intense fighting between government troops and Islamic State-inspired militants, led by the Maute terror group, that invaded sections of Marawi on May 23.

At least 129 soldiers were killed while nearly 1,000 others were wounded in the fighting that entered its third month today. Military reports said 583 members of the Maute group and its allies were killed in the battle. The group is still holding around 70 hostages.

School officials could not say if all students enrolled during this school term managed to reach the campus on Tuesday.

“I am very happy that classes have finally started,” said Josette Mahusay, a public administration freshman.

But at 5 a.m. on Tuesday, just three hours before the gates of the campus opened, government forces engaged a still unidentified group in a firefight in the nearby town of Marantao.

Capt. Jo-ann Petinglay, spokesperson for the military’s Task Force Marawi, said no casualty was reported in the firefight. She said the clash did not disrupt the opening of classes and failed to dampen the mood of students and MSU officials.

Mahusay said the incident led to tighter security in and around MSU. She said authorities had not ordered a campus lockdown.

“We are not afraid. We are determined to start classes, no matter what,” said Elizabeth Pinto, a faculty member, whose child was among those who attended classes on Tuesday.

Mahusay said her desire to attend college at MSU had not changed even with the continued fighting between government troops and the Maute group.

After all, MSU, she said, was far from the battle zone and she felt comfortable at the sight of soldiers securing the campus.

The militants had not occupied MSU. Some people chose to stay inside the campus, where soldiers had encamped, even at the height of the fighting in May.

Brig. Gen. Felicisimo Budiongan, deputy commander of the Philippine Army’s armory division, said the Marantao clash was isolated and had nothing to do with the opening of classes at MSU.

Inside the Marawi battle zone, not a single shot was fired on Tuesday but a reconnaissance plane was seen circling the city. There was also no airstrike, unlike days earlier when planes dropped bombs into an area where Maute gunmen and their allies had been holed up.

Budiongan said the military would do everything it could to keep everyone safe and keep peace and security inside the MSU campus.

Zia Alonto Adiong, spokesperson for Task Force Bangon Marawi, said the fighting in downtown Marawi, about 2 kilometers from the campus, should not deter students from pursuing their dreams.

“We should not allow any obstacle in pursuit of education,” said Jamaloden Basar, MSU vice president for administration and finance.

“We stood up against them. We would fight terror and we would not allow terror to defeat us,” he said.