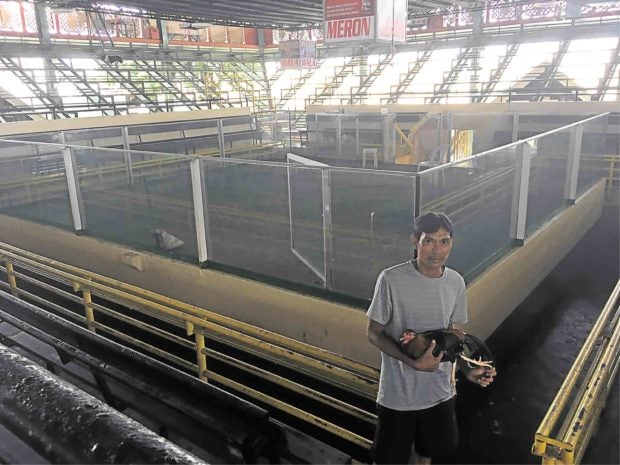 Roland Regala, a “kristo” (bet taker), has been out of work since the Pampanga government suspended cockfights in the province. —TONETTE T. OREJAS

GUAGUA, Pampanga — Rolando Regala went to a cockpit arena in Barangay San Roque here on Tuesday and learned there was going to be no “soltada” (derby) for the day. Holding a neighbor’s stag (7 to 8 month old game fowl) which was put in his care, Regala checked out the empty “gradas” (cockpit).

“‘Kristo’ (bet takers) like me won’t get to earn today, like last Saturday,” said the 40-year-old father of three. He earns around P1,000 during derbies on Sundays, Tuesdays and Thursdays from commissions handed out by winning players.

Regala’s source of income was affected when owners or operators of 16 cockpit arenas in Pampanga province complied with a local ordinance that banned all cockfights, bird exhibits and other sporting activities for two weeks as a precaution against the avian flu outbreak in San Luis town.

The ordinance cited the need to “prevent or lessen the possible adverse effect on the local economy, ensure public health, safety and general welfare of the people of Pampanga.”

“I understand why the cockfights have to be suspended. It’s good to be on the side of prevention,” Regala said.

To stave off hunger, Regala sent his wife and children to his in-laws. For the meantime, he planned to work as a parking attendant.

Around 200 bet takers in western Pampanga are in the same predicament.

Albert Celso, 44, borrowed money from relatives. “I hope the ban [on cockfights] won’t be extended to a month. We will die of hunger,” he said.

Victor Gopez has not earned the P400 he gets from each winning player as a “manari,” or one who installs blades on fighting cocks.

“I heard the bird flu outbreak in San Luis has been handled properly. It did not spread to game fowls so I think cockfights should resume,” Gopez said.

Gambling or hobby money not circulating in the local economy can amount to millions of pesos. The Bacolor cockpit arena alone draws as many as 1,000 players. If each player has P10,000 to bet, a cockpit loses P10 million for a day of derbies.

For example, Amelita Ganzon, 67, was unable to earn P200 from selling cigarettes and coffee at the cockpit arena in San Roque.

Bacolor Mayor Jomar Hizon, also president of the Kapampangan Game Fowl Breeders (KGBA), said a general assembly on Aug. 20 showed that no stocks from his group’s 300 members had been infected by the avian flu. KGBA employs more than 900 people.

“But we realize this can ruin the entire cockfighting industry. We have to put in place standards in biosecurity,” said Hizon, who has been breeding fighting cocks since he was 17.

If each farm breeds 1,000 cocks sold at a minimum of P6,000 each, the 300 KGBA members could face losses of up to P180 million on birds alone, or even P500 million when expenses in breeding stocks, fees and operational costs are added, Hizon said.