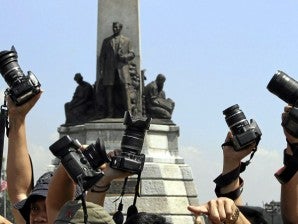 ‘NO FILIPINOS ALLOWED.’ Photographers raise their cameras in front of Dr. Jose Rizal Monument in Manila Friday to protest a “no-photo shooting” policy in front of the monument. NINO JESUS ORBETA/INQUIRER

What would Jose Rizal—who loved being photographed—make of the uproar over taking photos near his monument at Luneta?

More than 100 photographers on Friday marched to Manila’s Rizal Park to denounce a policy by park custodians requiring commercial photographers to pay fees if they want to shoot pictures in the park, and also protest against supposed discrimination against Filipino photo-shooters.

Bernard Mejias, a spokesperson for the group Bawal Mag-Shoot Dito, told the Inquirer his group wanted to ask why Filipino photographers were banned from shooting the Rizal Monument but foreigners purportedly were not.

“Isn’t that double standard?” Mejias said, adding it was ridiculous that he and other photographers, who pay taxes, were prevented from taking pictures of a public place.

“This has been a problem for us for a very long time. Every time we shoot (at the Rizal Monument), we are shooed away,” Mejias said. “We are taxpayers. Why should we not be able to use a public place? The policy needs to be explained.”

The group also complained that its members were being harassed by guards hired by the Department of Tourism and forbidden to take pictures not only in Rizal Park but also in Intramuros, which are public places.

“How can we promote Rizal Park and Intramuros when we are being forbidden from shooting? How can we put them in our exhibits and on the Internet?” said Mel Cortez, another group member.

“Are people being accosted and prevented from taking pictures at the Eiffel Tower and the Statue of Liberty?”

Tourism officials said fees were being collected at Rizal Park and Intramuros only from those who shoot photos for commercial purposes.

“There’s no fee when you just take a picture for your personal use. In fact, we encourage park visitors to take pictures as a way of promoting Rizal Park,” said Kenneth Montegrande, information officer of the National Park Development Council (NPDC), which oversees the park.

According to Montegrande, the minimum fee collected for a permit for commercial photography in Rizal Park is P1,000, which is good for four hours of shooting. The fees go to the National Treasury and are covered by receipts, he said.

He said the permit system for commercial photographers were “for their own protection” and that the permit would also help the shooters since security personnel could be assigned to protect them against inconveniences and from thefts.

Montegrande said shooters accosted by guards were only those “obviously” taking pictures for commercial purposes, such as those with tripods and lighting equipment.

Cortez, however, said even photo hobbyists with digital and single-lens reflex (SLR) cameras were being accosted.

It seems ironic that at the center of the squabble is a man who, according to some historians, loved to have his picture taken.

Rizal left behind a wealth of pictures taken from the time he was a teenaged student to the day he was shot by a firing squad in Bagumbayan—now Rizal Park—in 1896 when he was 35 years old.

A staffer at the Intramuros Administration (IA) said the agency collected fees of up to as much as P2,000 from  commercial photographers taking pictures around Intramuros. Mostly they shoot for wedding themes.

Fashion-related and advertising shoots, however, carry charges of as high as P12,000, according to one staffer.

Monuments are for all

Cortez, however, said the photo permits should not cover shots taken in parks, walls, ruins and other public areas of Intramuros.

“The IA and the NPDC do not own Intramuros and Rizal Park. As national monuments, they are part of the national heritage—they belong to all Filipinos,” Cortez said.

Mejias said the Rizal Monument symbolized freedom and nationalism. “Our pictures will help promote the country and boost tourism.  Where is the harm in that?”

“This is our form of silent protest,” he said.

But the group’s march to the Rizal Monument was not as silent as members would have wanted it to be. At one point, it turned into a shouting match with security personnel.

As the group unfurled streamers which read, “Bawal Mag-Shoot Dito (Shooting pictures prohibited here). Only in the Philippines,” five security guards attempted to break off the gathering, shouting at them to stop.

The security shift in charge, who introduced himself as Mads Carino, tried to snatch away the streamer, saying the protesters were conducting a prohibited activity.

The protesters asked him in chorus, “Bakit bawal?(Why is it prohibited?),” to which he shouted back, “It just is.” ‘NO FILIPINOS ALLOWED.’ Photographers raise their cameras in front of Dr. Jose Rizal Monument in Manila Friday to protest a “no-photo shooting” policy in front of the monument. NINO JESUS ORBETA/INQUIRER

Carino also said: “What is prohibited are those placards. You are being disrespectful to the national hero.”

Asked why Filipino photographers supposedly were prohibited from taking pictures of the monument while tourists were not, Carino told the Inquirer there was no such prohibition and they only required clearance from the security office.

He said the requirement was to “prevent the pictures from being used commercially.”

Montegrande clarified there was no prohibition against any kind of photo shoot at the park but photographers should have the courtesy of asking permission first before clicking away.

“There is no problem with pictures for personal use. What we restrict are photographs taken for commercial purposes,” he said.

Montegrande said that security personnel would be oriented on how to approach visitors, particularly those with cameras.

Tourists, both local and foreign, have complained about being prohibited from taking pictures in Intramuros. The complaints can be found in photography hobby sites on the Internet. With a report from Inquirer Research