President Rodrigo Duterte on Monday night assured the public that the police officers behind the killing of 17-year old Kian Lloyd delos Santos would go to jail if proven guilty.

“I saw the tapes doon sa TV and I agree that there should be an investigation,” he said in a press conference in Malacañang. “Should the investigation point to liabilities, my warning to all is there will be a prosecution and they have to go to jail. That I can assure you. There will be no luto-luto.”

The President said he was able to view the CCTV tapes of the teenager being led away by police officers.

He said he was silent on the issue since the Department of Justice (DOJ) has already ordered an investigation.

“Naunahan ako ni Aguirre and the decision of the Justice department, hindi mo ma-question. The President is not allowed to do that,” he said. “The most prudent thing for me to do is to shut up and wait for the result of the investigation.”

“Kaya hindi ako nag-papainterview, wala,” he added. “They would insist na inosente iyan. But, you know, let’s wait for the result of the investigation.”

He said he would not visit the wake of Delos Santos, saying: “It is pregnant with so many presupositions.”

People might interpret his visit to the wake as a chance for him to apologize to the Delos Santos family and as confirmation of the truth of the accusations against the police.

“Then I will be putting so many pressures sa mga pulis,” he said. “Matataranta na sila niyan. I cannot do that because ang organization sa PNP is under me. I cannot condemn them without validation.”

But if the killing of Delos Santos would be ruled as a rubout, he vowed that the police officers involved would go to jail.

“If talagang rubout, they have to answer for it. They have to go to jail,” he said. 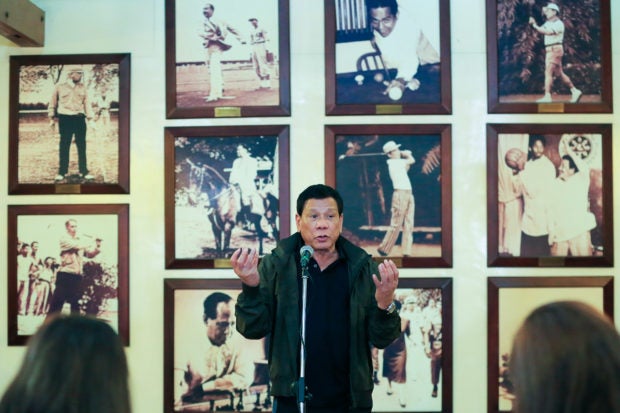 President Rodrigo Roa Duterte, in an interview with the Malacañang Press Corps (MPC) at the Malago Clubhouse, Malacañang Park in Manila on August 21, 2017, assures the public that he will let the investigation of the National Bureau of Investigation on the death of a 17-year-old boy in an anti-illegal drug operation run its course. He further stated that if the police operatives are found guilty, they will have to go to jail. ALBERT ALCAIN/PRESIDENTIAL PHOTO

The President has repeatedly said that he would pardon police officers performing their duties in his brutal war on drugs.

But asked if he would pardon the police officers behind the killing of Delos Santos if convicted, he said: “No, I saw the evidence.”

“Yung arestado na, barilin mo, that’s another thing. It will be murder or homicide,” he said.

Delos Santos was shot dead on the night of Aug. 17 by police officers who claimed that the minor had fired at them when he saw them coming.

Several witnesses, however, said police officers beat up the boy, gave him a gun, and forced him to run before shooting him.

Apparently referring to the various demonstrations against the killing of Delos Santos and his brutal drug war, Duterte said: “Uprising? Go ahead.”

Bersaluna’s relief was ordered by the PNP chief, Director General Ronald dela Rosa, who has expressed “dismay” over the Delos Santos killing.

Chief Supt. Roberto Fajardo, the Northern Police District director, stood by the narrative of his men, citing supposed intelligence gathered a day after the killing of Delos Santos.

Fajardo said Delos Santos was “newly identified” as a drug suspect and the police did not know he was a minor.

Fajardo said Delos Santos’ father and uncle, also belatedly reported as involved in the illegal drug trade, were aware of the younger Delos Santos’ prior involvement in narcotics.

“Now this is getting politicized. Now he’s being made out to be good, a saint,” Fajardo said of the boy. “I just hope we stop being emotional in lieu of the facts.”  /atm