PNP: Kian was only a newly identified drug suspect during police ops 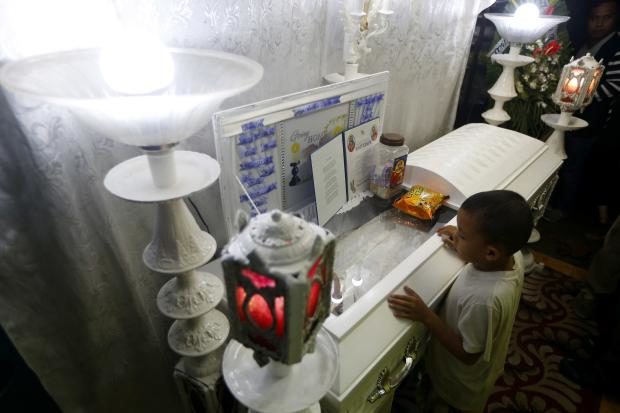 Jomari (only one name given), a neighbor and friend of slain Kian Loyd Delos Santos, refuses to leave the wake of his friend Friday, Aug. 18, 2017 in Caloocan City. Kian Loyd, a 17-year-old Grade 11 student, was killed on Wednesday allegedly in a shootout with police. The killing of Kian has sparked protests and condemnation from concerned citizens.(Photo by BULLIT MARQUEZ / AP)

Seventeen-year-old Kian Lloyd Delos Santos was only a newly identified drug suspect and was not the actual target during the police operation in Caloocan City that cost his life.

(He was just newly identified based on the intel and at the same time on those who were caught… We have documents.)

“When you say newly identified, wala ka sa listahan; bigla na lang nag-come up (you’re not on the list; your name just came up),” he added.

Delos Santos, a Grade 11 student, died after he was shot during a police operation in Brgy. 160 in Caloocan last week.

Police claimed he resisted authorities and allegedly fired at them, prompting them to fire back. But witnesses claimed the police account was not true.

While Delos Santos, together with his father and uncle, were not on the watch list of drug users, Fajardo said they have intelligence information that they were involved in the drug trade.

A certain Neneng was ordering the minor to sell drugs.

The police chief said that Delos Santos also sold at least 10 grams of shabu everyday as he was identified by the drug pushers who were arrested.

(The pusher who was caught identified him, dealing drugs at least 10 grams daily)

Delos Santos also had a reputation as a drug runner in his place before he died, according to the police chief.

(He’s known in the area; he’s called a bully, addict, pusher. Now that he was killed, he seems as if he’s a good person and a saint.)