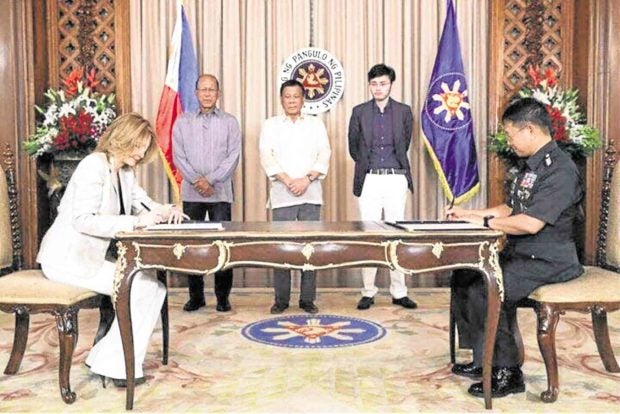 In an order dated Aug. 16, Lorenzana told the military, the police and other law enforcement agencies that Ali and his son had been removed from Arrest, Search and Seizure Orders (Assos) Nos. 1 and 2.

The said Assos were issued on May 29 and June 5 against personalities suspected to have links with the Maute group.

Both Ali and Arafat denied the charges.

Ali even pointed out to his being emissary to the Maute group in behalf of the government. He said he was tapped by Presidential Adviser on Peace Process Jesus Dureza to negotiate with the Maute group at the height of the fighting in Butig, Lanao del Sur, last year.

He said he only talked with the Maute group thrice to convince them to set aside violence and peacefully negotiate with the government.

But Lorenzana had said then the government had some proof Ali might have links with the Maute group.

Ali and Arafat both went into hiding while Ali’s brother, Fahad Salic—who was also former Marawi mayor—was arrested in Misamis Oriental on charges of rebellion.

In a subsequent raid on Ali’s home in Marawi City on June 23, authorities reported the recovery of some P10 million worth of shabu. He also denied it, saying it must have been planted.

In removing Ali and Arafat from the wanted list in connection with the Marawi crisis, Lorenzana said he gave weight to the “representation” made by the Office of the Presidential Adviser on the Peace Process (Opapp).

“Yes, I confirm on the representation of Opapp Sec(retary), who vouched for the father and son,” he said in a text message to the Inquirer. —ALLAN NAWAL