Muslim clerics call for end to airstrikes in Marawi 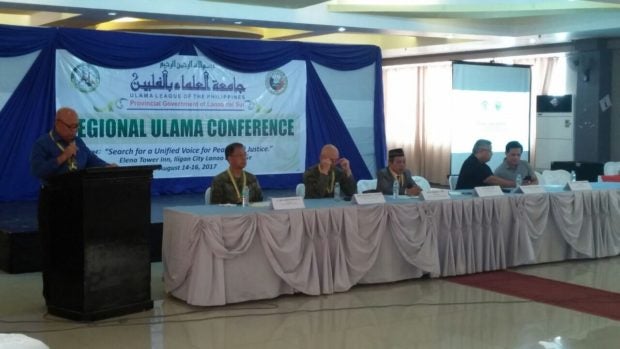 Muslim scholars and religious leaders are calling for a stop to airstrikes in Marawi City, which they said have caused damage to lives and properties.

“That while we support this action and other programs of the government for peace and development, we are earnestly requesting the President of the Philippines to find other wats to purge out of Marawi the extremists rather than the aerial bombings which have caused is continuously causing damage to lives and property,” the members of an Ulama conference said in a statement.

A regional Ulama conference was organized by the Ulama League of the Philippines in Iligan City on Monday to Wednesday this week.

The group also condemned the violent extremism in Mindanao.

As quoted by the Western Mindanao Command, Professor Mark Anthony Torres of the Institute of Peace and Development in Mindanao, cited the vulnerability of the youth and students due to the climatic recruitment of the IS-linked Maute group through social media.

Also in a statement signed by the participants, they also appealed for the appointment of a Muslim Justice of the Supreme Court.

The group also agreed to ask President Duterte “to fill up existing national offices intended for Muslims which remain vacant although there are qualified Muslims who can truly perform the functions of said offices like: the Presiding Justice and two Associate Justices of the Shari’ah Appellate Court, and the Jurisconsult in Islamic Law and Jurisprudence. The Ulama also appeal for the appointment of a Muslim Justice of the Supreme Court.” Frances Mangosing