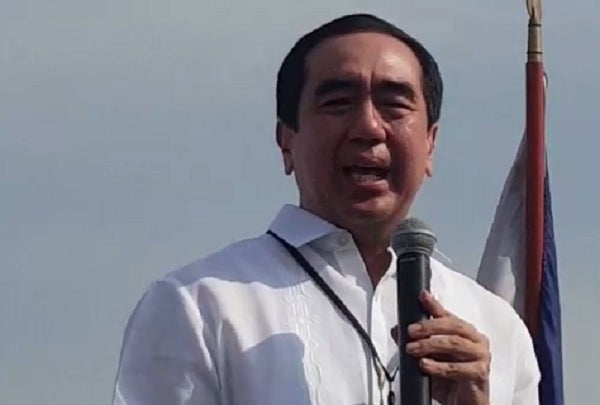 Speaker Pantaleon Alvarez on Wednesday said Commission on Elections (Comelec) Chair Andres Bautista should seriously consider quitting his post after his credibility was tainted by the allegations of illegal wealth leveled against him by his estranged wife.

The House leader also said Patricia Cruz-Bautista, having “personal knowledge” of her husband’s finances, was well within her right to file an impeachment complaint over allegations the Comelec head had amassed nearly P1 billion in undeclared assets.

Asked in a television interview if the election chief should stay in office, Alvarez said: “I think Chairman Bautista should consider that (resigning) seriously.”

“Because as the head of the agency that is handling the country’s elections, someone credible is needed. If he’s already tainted, it does not look good,” he said on ANC’s “Headstart.”

While resigning was an “option” for Bautista, Alvarez said “it doesn’t mean he’s off the hook.”

“There are marital issues but we won’t dwell on that, but there are issues of corruption, issues involving [electronic voting company] Smartmatic. There are issues of money laundering that the government should look into,” he said.

Alvarez said the House was obligated to process moves

to investigate the allegations against Bautista, following the filing of resolutions seeking a congressional inquiry.

No impeachment complaint has been filed against Bautista at the House as of Wednesday. But lawyer Oliver Lozano submitted a complaint against him in the Office of the Ombudsman earlier this week.

“I don’t want to preempt the committee on justice. But if his wife wants to file an impeachment complaint, she may file it at the House of Representatives and we have to process it,” Alvarez said.

“We will check whether it is sufficient in form and substance. Then after that, we may forward it to the Senate” acting as an impeachment court, he added.

Asked what made him think Bautista might have violated antimoney-laundering laws, Alvarez said the House should look into Bautista’s deposits in the Luzon Development Bank.

“Because it looks like there is a small bank—is that Luzon Development Bank?—where the money is funneled. Who will deposit in such a bank?” he said in Filipino.

Justice Secretary Vitaliano Aguirre said on Wednesday the Bureau of Internal Revenue (BIR) had started its scrutiny of the tax records of the election chief, Patricia and the owner of a law firm which allegedly paid him commissions. —With a report from Marlon Ramos