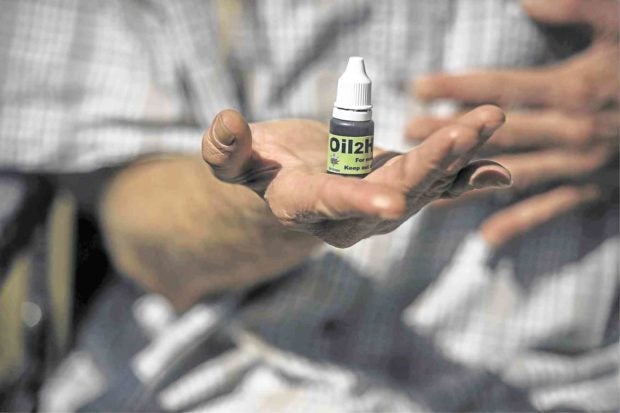 Last year, shortly after winning the election, President Rodrigo Duterte said in several press interviews that he was personally in favor of legalizing medical marijuana.

“Medicinal marijuana, yes, because it is really an ingredient of modern medicine,” he replied when asked by a TV reporter to comment on the subject.

“There are medicines being developed, or are now in the market, that contain marijuana for medical purposes,” he said.

Mr. Duterte, however, said he would push for stricter regulation to ensure that medicinal marijuana would be offered only to those who really need it.

He also said he was opposed to the use of marijuana as a recreational drug.

Two years earlier, 70 congressmen, or 24 percent of the House of Representatives, endorsed the original medical marijuana bill, which was revised and is now known as House Bill No. 180, or the Philippine Compassionate Medical Cannabis Act.

The PCCS, or the Philippine Cannabis Compassion Society, is an organization of cannabis advocates, mostly patients and parents of children wanting to have access to medical marijuana.

Members of the group attended and assisted activities that Albano’s office organized to discuss the pros and cons of the bill: a multisectoral policy forum, three forums with medical doctors, an experts group meeting, other meetings with the Policy Development and Planning Bureau of the Department of Health (DOH), and a policy debate on medical cannabis between Ateneo de Manila University and University of Santo Tomas law students.

Albano also commissioned a policy research on the palliative and therapeutic use of cannabis on different illnesses and their levels of established effects.

A PCCS representative told the Inquirer that the group was upbeat and hopeful that Congress would pass the bill.

“The letters we get from supporters who want to become members increase every day,” the PCCS representative said. “We don’t have a formal membership. What we have, though, is a group page and a group chat. Our group is heavily dependent on Facebook because of its convenience and accessibility. We separate supporters with legitimate needs and put them in a group chat where they can communicate directly with other members with similar needs.”

The group has about 300 patients seeking help to get access to cannabis, the representative said. “We have their medical conditions and history on file.”

Former Health Secretary Jaime Galvez Tan is an advocate for the legalization of medical cannabis. He told the Inquirer that Congress invited him to be a resource speaker on the subject and he gladly said yes.

“More people in the Philippines are suffering from epilepsy and other neurological disorders,” Tan said, and that means the more reason for medical cannabis to be available now. “It is a safer and cheaper way to treat patients.”

The most convincing argument in favor of legalizing medical cannabis, Tan said, is that the drug improves the quality of a patient’s life, because it has been proven to be effective in pain management.

“It’s a better alternative to morphine, which doctors legally prescribe, but makes the patient noninteractive, drowsy, sleepy,” he said.

The belief that marijuana is addictive is false and obsolete, Tan said.

“Why are we afraid of marijuana,” he said, “when morphine has been used in the hospital for the past 50 years, with no reported abuse, though it is the one that’s addictive.”

Once medical marijuana is legalized, Tan said, the country can first import the substance while provisions are made to cultivate the plant locally.

“We know it grows well in the Philippines,” he said, adding that “there must be strict rules [for] planting it.”

The PCCS representative said: “I am personally for local cultivation. We have the raw materials, so I don’t see the need for importation. Besides, we can develop our local strains. If we will become first in Asia to allow medical use of cannabis, just think of the myriad benefits. It will open our country [to] medical tourism, it will open a lot of job opportunities as well.”

The medical cannabis bill has a good chance of passing if the majority in the House of Representatives will take note of a clause in Section 16 of Republic Act No. 9165.

While it states: “The penalty of life imprisonment to death and a fine ranging from P500,000 to P10,000,000 shall be imposed upon any person who shall plant, cultivate or culture marijuana,” the succeeding lines say: “Provided, that in the case of medical laboratories and medical research centers which cultivate or culture marijuana, opium poppy and other plants, or materials of dangerous drugs for medical experiments and research purposes, or for the creation of new types of medicine, the Board shall prescribe the necessary implementing guidelines for the proper cultivation, culture, handling, experimentation and disposal of such plants and materials.”

Among the pertinent components of HB 180:

“The state shall legalize and regulate the medical use of cannabis, which has been confirmed to have beneficial and therapeutic uses to treat chronic or debilitating disease or medical condition that produces one or more of the following: cachexia or wasting syndrome; severe and chronic pain; severe nausea; seizures, including but not limited to those characteristic of epilepsy; or severe and persistent muscle spasms, including but not limited to those associated with multiple sclerosis.”

“The bill mandates the DOH secretary to lead the formulation of regulations to implement the act. The secretary shall also issue registered identification cards to qualified patients after a careful review of their required documents.”

“The bill also provides for the establishment of the Medical Cannabis Compassionate Center (MCCC), which refers to any entity registered with the DOH and licensed to acquire, possess, cultivate, manufacture, deliver, transfer, transport, sell, supply and dispense cannabis, devices or related supplies and educational materials to registered qualifying patients.”

“The MCCC shall guarantee the appropriate dispensation of cannabis and shall not release more than the prescribed dosage for one month to a registered qualified patient or designated caregiver. It shall maintain internal confidential record of each entry which includes information on the date and time the cannabis was dispensed, the amount of cannabis being dispensed and on whether it was dispensed directly to the patient or to the designated caregiver.”

“A registered MCCC or Medical Cannabis Safety Compliance Facility shall implement appropriate security measures to deter and prevent the theft of cannabis and unauthorized entrance into areas containing cannabis.”

“Persons who discriminate against qualifying patients and violate confidentiality shall be punished accordingly.”