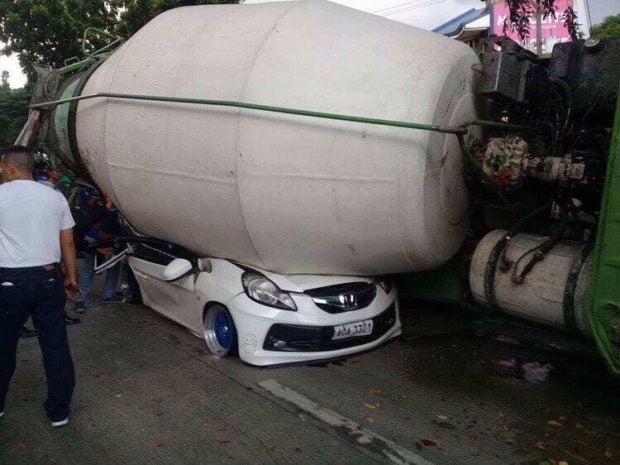 A cement mixer crashes into a white Honda traversing Mindanao Avenue on Tuesday, trapping the four people in the car. (Photo from MMDA spokesperson Celine Pialago)

A cement mixer crashed on a family car traversing Mindanao Avenue in Quezon City on Tuesday afternoon, killing one person and injuring four others.

The lone fatality was identified as Ulysses Ramos, 34, the car’s driver. The injured were Ramos’ wife Marife, 35, and children Eulariza, 12, Eugene, 8, and Enrico, 4.

The cement mixer was traveling through the avenue’s southbound lane sometime before 5 p.m. when it suddenly lost its brakes.

The truck, owned by Topstar Ready Concrete Inc., hit the center island and tilted towards the car, a white Honda Brio, with plate number AOA 3301.

The incident happened in front of the headquarters of the Bureau of Jail and Management and Penology (BJMP) on Mindanao Avenue, near its intersection with Congressional Avenue.

Most of the first responders were BJMP personnel who propped up the truck with bamboo poles and steel rods to prevent it from further crushing the car.

They pulled out four of the passengers – one of them a 12-year-old Eulariza – out of the wreckage and rushed them to a hospital.

It took rescuers about two hours to pull out the last person from the crushed car.

Earlier the MMDA told INQUIRER.net that two of those rescued had died. However, the MMDA later corrected the initial information, saying that the people rescued were injured.

Meanwhile, police had taken custody of the truck driver identified as Jayson Nuay, 27.

It can be recalled that in 2013, the INQUIRER reported that Metropolitan Manila Development Authority (MMDA) issued guidelines requiring the drivers and operators of heavy vehicles carrying cement to have signs warning other motorists to keep a safe distance from them.

In a memorandum order dated June 11, the MMDA, led then by Francis Tolentino, said the drivers of cement mixer trucks should put the warning sign “Loaded with Concrete — Keep Distance,” replacing the word “cement” in its previous memorandum order signed in April this year.