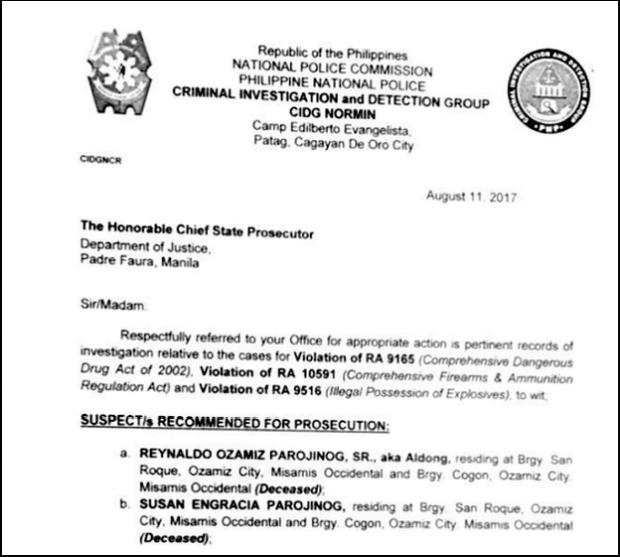 Part of the CIDG-NorMin letter to the Department of Justice

The Department of Justice (DOJ) has rejected a complaint that the Criminal Detection and Investigation Group in Northern Mindanao (CIDG-NorMin) tried to file against Ozamiz City Mayor Reynaldo Parojinog Sr. and his wife Susana – because they are “deceased.”

According to a member of the DOJ’s Anti-Drug Task Force, who refused to be identified because he has no authority to speak, the DOJ cannot accept the complaint because it indicated that both respondents are “deceased.”

The complaint was not even recorded at the DOJ’s Docket Receiving Section.

The Parojinog couple were killed on July 30. According to the police officers involved in the operation, they were serving a search warrant issued by Executive Judge Cecilyn E. Burgos-Villavert of the Quezon City Regional Trial Court.

But the Parojinogs, they said, and some of their companions fired at them, some bullets hitting their patrol car and a member of their raiding team, which prompted them to retaliate.

Supt. Tom P. Tuzon, CIDG-Northern Mindanao chief, sent a letter, dated Aug. 11, to the chief state prosecutor of the Department of Justice recommending the filing of a complaint against the deceased Parojinogs for violation of three laws – the Comprehensive Dangerous Drug Act of 2002 (Republic Act 9165), the Comprehensive Firearms and Ammunition Regulation Act (RA 10591), and Illegal Possession of Firearms and Explosives (RA 9516). /atm