Elections chief Andres “Andy” Bautista, who is being accused by his wife of having P1 billion in unexplained wealth, became emotional anew when he faced employees of the Commission on Elections (Comelec) on Monday.

(It is not hard to give up the position. My problem is that I don’t want the Comelec family to be out of my life.)

“Kasi talagang over the years, you have shown sincere, genuine care and affection. And perhaps that’s what also made my thought process difficult,” he added.

The Comelec chief said he was grateful for the people’s support. He said it was helping him through the lows he was going through, referring to the allegations hurled at him by his wife, Patricia.

(A lot of people are expressing support. Even Cardinal Tagle called me and I asked his help in discerning what I should do.)

(Because there are lots of interests at stake here: my family’s and Comelec’s.)

Bautista has been denying the allegations against him, saying he was a victim of his “wife’s extortion and infidelity,” a claim which Patricia said was not true. 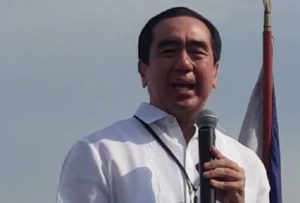 The Comelec chair’s older brother, Martin, has also defended him. According to Martin, Bautista never stole money and that he didn’t lie about his statement of assets, liabilities and net worth (SALN).

(I told my brother corruption is bad. So I told him that if this is true, you should commit suicide. He denied it, and I believe my brother.)

The elections chief is maintaining his innocence and is asking his supporters to continue praying for him.