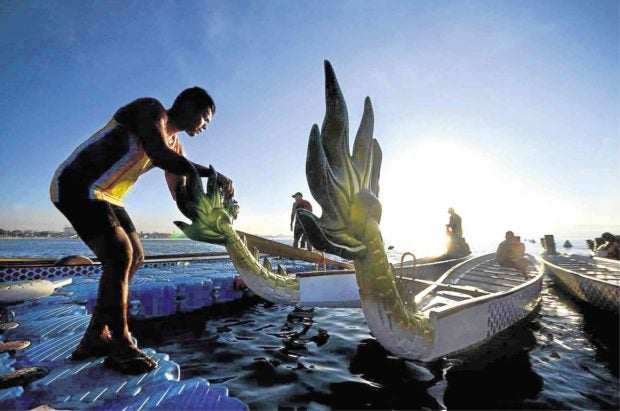 A participant prepares his boat for a race during the Kadayawan Dragon Boat competition that was part of the Davao City festival. —ARJOY M. CENIZA

DAVAO CITY — There was just one way the city government could squelch speculation that it would not push through with the city’s annual Kadayawan Festival because of martial law in Mindanao — proceed with it.

“We will surmount any challenge as we always have,” said Mayor Sara Duterte-Carpio at the launch of the 32nd Kadayawan Festival last month.

“We will not allow our fear to cripple us,” she said.

Sara, President Rodrigo Duterte’s daughter, made the statement amid rumors that the city would cancel the festival as a result of martial law and because of fears the war on terror now focused on Marawi City could spill over to the city.

The festival, launched at Marco Polo Davao, would last until Aug. 20.

At the launch held last month, Sara asked the people of Davao to come and join the celebration which would start today.

The Kadayawan, Sara said, was a “recognition of and a call for us to transcend boundaries and show the world we are one diverse community working as one for peace, inclusive growth and environmental protection.”

The mayor also urged the city’s police and military officials to be present in the planning stage of the activities to have a better grip of security plans during the festival. The mayor chairs the Kadayawan executive committee.

Ronald Go, Davao City Chamber of Commerce and Industry Inc. president and Kadayawan 2017 cochair, said that in this year’s Kadayawan, the city wanted to deliver a message that it was all systems go for the festival even under martial law.

Gatchi Gatchalian, Davao Tourism Association president and festival director, said the launching of Kadayawan was held earlier than usual to inform people that there was no stopping it.

“We did it early because we know that people are still not sure if Kadayawan will push through and we are still in martial law and we want it launched earlier so that the message is #tuloynatuloyangkadayawan,” Gatchalian said.

One of the most anticipated events in the festival, street dancing, would push through.

An indigenous dance festival would give tourists an opportunity to dance with ethnic members of the community.

The city had been in tight security after a terror attack in September last year that killed 15 people and wounded 67 others.

The bomb attack at Roxas night market had been blamed on the Maute group, which had sworn allegiance to the Islamic State (IS) and had joined with Abu Sayyaf in an attempt to establish an IS province in Marawi.

It happened at the height of military offensives against Maute in Lanao del Sur and Abu Sayyaf in Sulu and Basilan provinces.

At least five suspected Maute members had been arrested in the aftermath of the attack.

Since the Roxas market blast, more security forces had been deployed to the city which grew in number after martial law in Mindanao was declared on May 23.

This week, however, security had become even tighter, with police forces deployed to every street corner in the downtown area. —Judy Quiros