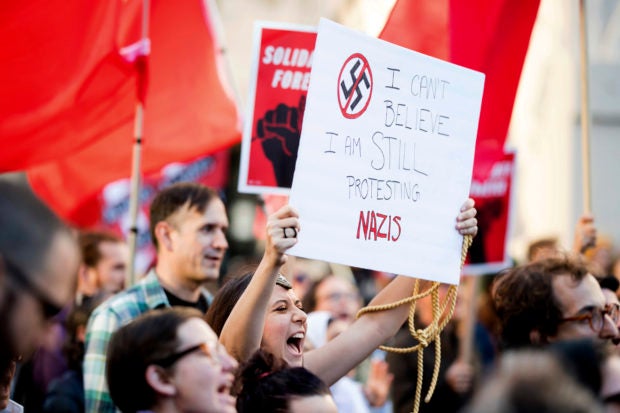 Larisa Roberts joins protesters in Oakland, Calif., during a counter protest to a rally by white nationalists in Charlottesville, Va., on Saturday, Aug. 12, 2017. (AP Photo/Noah Berger)

OAKLAND, Calif. — Protesters marched in California cities to decry racism in the wake of deadly violence that erupted at a white nationalist demonstration in Virginia.

In Oakland, hundreds of protesters gathered Saturday night to hear speakers and then marched peacefully downtown, chanting and waving signs and banners. Some of the protesters blocked Interstate 580 before being dispersed, The San Francisco Chronicle reported.

One of the downtown marchers carried a hand-crafted sign reading, “Call it what it is. White supremacy.”

The hastily arranged gathering was a response to events earlier Saturday in Charlottesville, Virginia. A car plowed into a crowd that was peacefully protesting a white nationalist rally, killing one person and injuring 19.

Authorities say the driver of the car, 20-year-old James Alex Fields Jr. of Ohio, was charged with second-degree murder.

Trump blames ‘many sides’ for violent clashes in Virginia