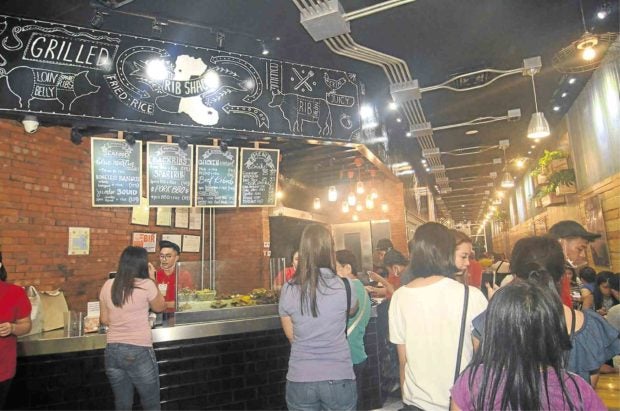 It used to be that eating out was a way of celebrating special occasions.  These days, it has become a routine among Metro Manila consumers who have to contend with a hectic lifestyle and the worsening traffic.

Online information on new dining places and food offerings has also fueled this phenomenon, according to the latest report by the market research firm Nielsen, which showed that people in the National Capital Region dine out of their homes an average of 42 times a month, or almost twice a day.

The report also indicated lunch and afternoon snacks as the most commonly eaten meals away from home. Among consumers pressed for time, the perennial question they have to answer is where and what to eat, the report said.

It added that diners often consider accessibility to their workplace or residence in their choice of dining places.

“Among the commonalities of these food [outlets] are their accessibility to the home or the work area, their offer of convenience and value for money,” Nielsen Philippines managing director Stuart Jamieson said in a statement.

“Usually, in these establishments, it is faster for consumers to eat and go, or just grab and go. Consumers would also usually eat or buy meals on their way home, [en route] to work, or while at work. And when they do, they look for places where they can get their pesos’ worth,” Jamieson said.

The findings are based on interviews and focused group discussions conducted in June and July 2017 among Metro Manila respondents aged 16-50.  The respondents come from socioeconomic Classes ABCD and are considered “purchase decision makers.”

According to the respondents, they frequent five or more different types of eating places in a month, with quick service restaurants, convenience stores, neighborhood bakeries or bakeshops, and roadside eateries or “carinderias” being the most popular.  They eat or buy food from these places at varying frequency—from once a week to almost daily.

The report noted that convenience stores have capitalized on this growing trend by offering diners a variety of choices and introducing precooked packed meals that can be reheated and eaten in the premises, or ordered as take-out meals.

Participants in the focused group discussion also cited the worsening traffic situation in Metro Manila as deterrents to preparing and eating home-cooked meals even during dinner, a challenge that could pave the way for the growth of such food outlets as rotisseries, barbecue stalls, food carts and kiosks.

Television—via ads or promotion on shows—continues to be an important source of awareness when consumers look for new places to dine in, the report said. Word of mouth and store display also place high in the respondents’ list of information sources.

Social media, meanwhile, in the form of feature stories on food blogs and food reviews, are gaining traction among the internet-savvy younger generation, the report added.

“For startup dining places with less budget to invest on TV commercials or billboards, word of mouth and creating buzz online through blogs and reviews are practical alternatives, because they are also potent sources of awareness and information especially among millennials,” Jamieson said.

“In fact, four in 10 respondents belonging to the age group claim the highest reliance on online food blogs compared to the more mature respondents,” he added.

The growing trend could affect the buying habits of consumers as well, Jamieson said.  “As the incidence of eating out of home increases, we can expect an effect on consumers’ household purchases, especially of items used in cooking such as fresh ingredients, sauces and condiments.”

Jamieson added:  “Manufacturers can compensate for what could be lost at the household level by tapping into the growing patronage of these neighborhood food establishments. Work with these channels to come up with food, beverage and dessert offerings for consumers.”