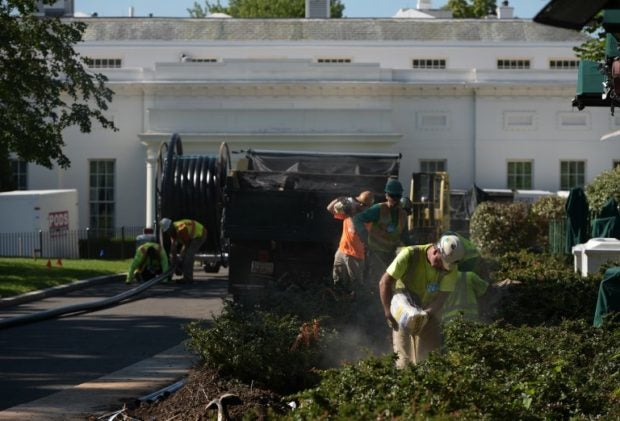 Workers are seen in front of the West Wing of the White House as it undergoes renovations on August 9, 2017 in Washington, DC. AFP

WASHINGTON—The West Wing is where it all happens at the White House — historic decisions, power struggles, meetings with foreign leaders. It is the nerve center of American power.

The West Wing, which was made even more famous by the award-winning television series of the same name, is home to the Oval Office and the Situation Room, where the president and his top aides meet in a crisis.

It also houses the offices of the president’s closest advisors, the White House press corps and the briefing room.

But for a week now, the West Wing has been one big construction site.

President Donald Trump and his inner circle have decamped. In their place are painters, plumbers and construction workers.

The Oval Office is empty — the armchairs where foreign leaders have sat, couches, tables and even the legendary Resolute Desk, under which Caroline Kennedy hid as a child, have all been moved out.

Trump is vacationing at his golf club resort in Bedminster, New Jersey. His close aides have temporarily moved to the adjacent Eisenhower Executive Office Building.

Like the rest of the White House, the cornerstone of which was laid in 1792, the West Wing needs regular renovations. The main goal of this summer’s work is to update the creaking air conditioning system.

The General Services Administration, the government agency tasked with maintaining federal buildings, said the heating and AC system was “well past its life cycle and will fail in the near future without intervention.”

According to the GSA, the expenses are in line with those incurred by the three previous administrations.

‘I love the White House’

The White House, which was rebuilt after being torched by the British during the War of 1812, has undergone numerous rounds of renovations, including a major refurb in the late 1940s under Harry Truman.

Until the start of the 20th century, the president worked from the second floor of the house, where he lived with his family.

In 1902, Teddy Roosevelt created what would later become the West Wing.

“Roosevelt created a wing,” he said, “and that was expanded over the years.”

“Taft in 1909 had the first Oval Office, but it’s not until 1934 when Franklin D Roosevelt renovates and expands the West Wing that the Oval Office is placed in the current southeast corner adjacent to what’s now the Rose Garden.” William Howard Taft was the 27th president.

The last major renovations came during the presidency of Richard Nixon, who decided to add a briefing room — its 49 seats shared by accredited reporters from around the world — above the pool built by FDR in 1933.

The structure of the pool, which can be reached by a small staircase, is still intact — but it is filled with electrical cables. The original tiles are now covered by the signatures of journalists and White House employees who have visited it.

The renovation work underway is nothing special, but was highlighted after Trump reportedly called the most famous building in America a “real dump” in a conversation with some of his club members, according to Golf.com.

The real estate mogul-turned-president categorically denied making such a statement, insisting he was happy to leave his gilded New York penthouse for 1600 Pennsylvania Avenue.

“I love the White House, one of the most beautiful buildings (homes) I have ever seen,” he tweeted.

In 10 days, he will return to his new home sweet home — which should have the smell of fresh paint.