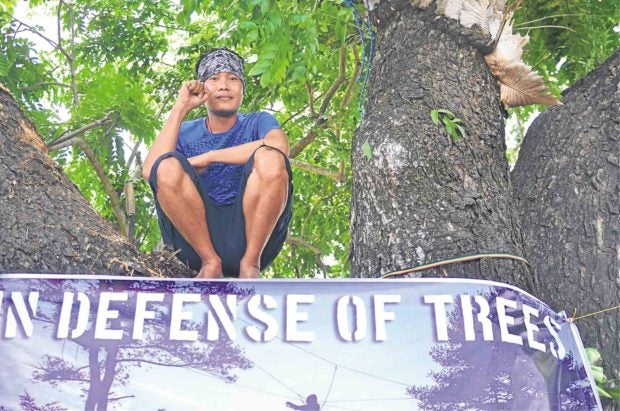 A student from Ateneo de Naga takes a break after tying a ribbon around a tree marked for cutting in Naga City on Aug. 6.—MIGUEL ENRICO V. IMPERIAL/CONTRIBUTOR

NAGA CITY—A regional trial court (RTC) here had stopped the cutting of century-old trees on major city roads, issuing a Temporary Environmental Protection Order (Tepo) in favor of a petition against tree-cutting for a road-widening project of the Department of Public Works and Highways (DPWH).

In his decision, Judge Leo L. Intia, of RTC Branch 27, said he was “convinced by the allegations of the complainants” that cutting trees for the DPWH project would leave “irreparable injury.”

Edgardo M. Castro and several other representatives of the group “They Grey, We Green” petitioned the court for the Tepo to save trees along San Felipe Road and Magsaysay Avenue.

Also saved were trees along Naga-Carolina-Panicusaon Road in the village of San Felipe.

The group filed the petition noting that more than 23 trees had already been cut along Magsaysay Avenue.

Reacting to the Tepo, Richard Ragrario, assistant district engineer of the second engineering district of Camarines Sur that supervises the road-widening project, said his office will heed the court order.

Ragrario said, however, that road-widening work would continue along San Felipe Road without cutting trees.

Trees would be left untouched in the middle of pavements, he said.

Lucy Castañeda, spokesperson of the DPWH, said when faced with complaints against tree-cutting, the department usually avoids cutting trees but continues with the road work.

Castañeda said the engineering district would issue a statement on the Tepo on Monday.

The city government, though, had given its approval to the tree-cutting, according to Councilor Salvador del Castillo during a city council session on Tuesday.

Del Castillo said that last year the council passed a resolution asking the Department of Environment and Natural Resources and the DPWH to cut trees along roads in Naga City.

The Tepo cited the argument of tree-cutting opponents saying there was “no evidence that widening of roads ease traffic congestion” which would make the DPWH project not worth pursuing.

“On the contrary, when a road is widened, more cars pass just like on Edsa—a very wide road where traffic congestion is a daily occurrence,” the Tepo said citing the petition against tree-cutting.—JUAN ESCANDOR JR.