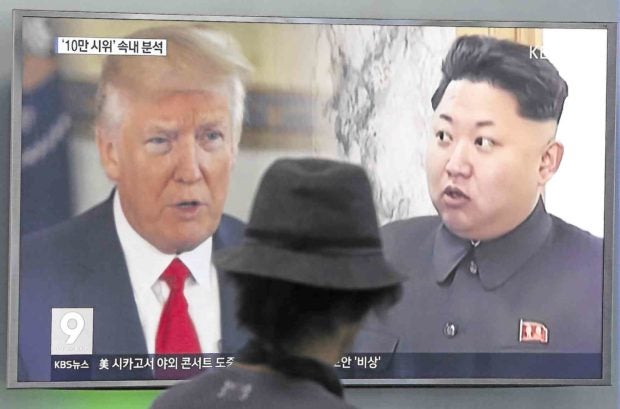 A man watches as US President Donald Trump and North Korean leader Kim Jong-un come face to face on a television screen in a Seoul train station on Thursday. —AP

There is little danger that a North Korean missile will hit the Philippines if the rogue state makes good on its threat to fire a salvo toward Guam, according to Armed Forces of the Philippines spokesperson Brig. Gen. Restituto Padilla.

Padilla also said there was a “remote” possibility that debris from the missile’s disintegration could reach the country, particularly the northern coastal areas.

“It’s a source of concern, that’s why the [Association of Southeast Asian Nations] leaders or foreign ministers discussed it thoroughly and came up with a statement,” Padilla said of Pyongyang’s missile threat.

“But we don’t see this as potentially hitting us in any way because it is directed toward an outer island in the Pacific itself,” he added.

If the missile disintegrated in the atmosphere, the debris could scatter and their trajectory could include the Philippines’ northern coast, he said.

“We have to forewarn our citizens to be on the lookout,” Padilla said. “But that’s something that we see as remote.”

As doomsday threats flew between the United States and North Korea on Friday, a Chinese state-run newspaper called on Beijing to “stay neutral” if the hermit state—with which it had a mutual defense pact—struck first.

There were also mounting calls within South Korea to build nuclear weapons of its own to defend itself, a prospect that would complicate the situation even further.

The South, which hosts 28,500 US troops on its soil to defend it from the North, is banned from building its own nuclear weapons under an atomic energy deal it signed in 1974 with the United States.

Padilla said the presence of North Korea’s Foreign Minister Ri Yong-ho during the Asean Regional Forum in Manila recently indicated that Pyongyang still wanted to talk with its Asian neighbors.

The forum was also attended by foreign ministers from the United States, Japan and South Korea.

“If they [North Korea] are intently going to do what they have been announcing, then the foreign minister would not have gone there,” Padilla said.  “So I think there is still a lot of room for dialogue, a lot of room for talks. And we see this as a positive sign.” 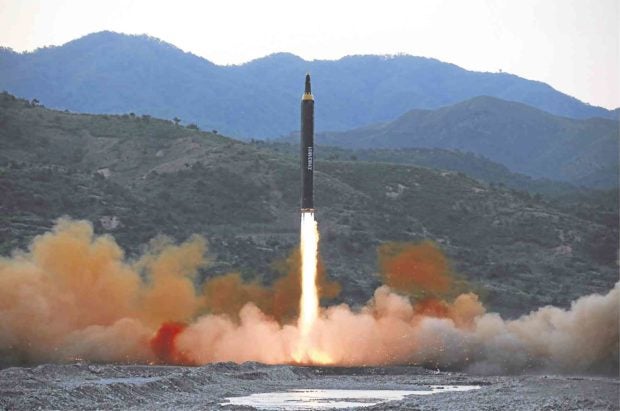 A new type of ballistic missile is launched by North Korea, which claims to be preparing a plan to launch four such missiles into the waters just off Guam. —KCNA VIA AP

North Korea’s threat to fire missiles in the waters off Guam came amid its intensifying word war with the United States, which had been critical of its nuclear and ballistic missile program.

Guam is a US territory about 2,500 kilometers east of the Philippines.

In Beijing, the nationalistic Global Times tabloid said in an editorial that Washington and Pyongyang were playing a “reckless game” that could lead to “miscalculations and a strategic war.”

“Beijing is not able to persuade Washington or Pyongyang to back down at this time,” the Global Times said. “It needs to make clear its stance to all sides and make them understand that when their actions jeopardize China’s interests, China will respond with a firm hand.”

The commentary came after US President Donald Trump warned North Korea this week that it would face “fire and fury like the world has never seen” if it continued to threaten the US with its missile and nuclear programs.

That prompted a defiant Pyongyang to threaten a missile attack on Guam, home to major US air and naval facilities.

The North’s military chief,  Ri Myong-su, said if Washington  continued  its “reckless” behavior, Pyongyang would “inflict the most miserable and merciless punishment upon all the provokers.” 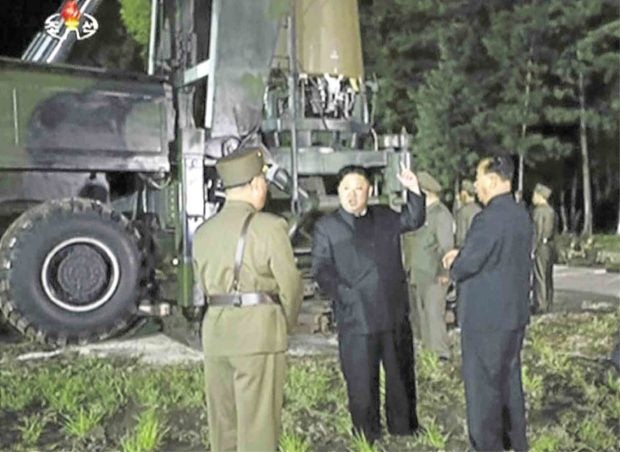 China—which has been accused by the United States of not doing enough to rein in its longtime ally—has maintained that political dialogue is the only solution.

China fought alongside the North in the 1950-53 Korean War and the two nations signed a mutual defense pact in 1961, but the Global Times suggested Beijing should remain on the sidelines if Pyongyang launched the first salvo in a new conflict with the United States.

“China should also make clear that if North Korea launches missiles that threaten US soil first and the United States retaliates, China will stay neutral,” the editorial said. “If the United States and South Korea carry out strikes and try to overthrow the North Korean regime and change the political pattern of the Korean Peninsula, China will prevent them from doing so.”

With Pyongyang regularly threatening to turn Seoul into a “sea of flames”—and nagging questions over Washington’s willingness to defend it if doing so put its own cities in danger of retaliatory attacks—the South’s media are leading calls for a change of tack.

South Korea is highly technologically advanced and analysts estimate it could develop an atomic device within months of deciding to do so.

“Now is time to start reviewing nuclear armament,” the Korea Herald said in an editorial on Friday.

After Pyongyang conducted two successful tests of an intercontinental ballistic missile last month, putting much of the mainland United States within reach, the paper warned: “Trust in the nuclear umbrella the United States provides to the South can be shaken.”

It urged Washington to deploy some of its atomic weapons to South Korea if it did not want to see a nuclear-armed Seoul.

The United States stationed some of its atomic weapons in the South following the Korean War, but withdrew them in 1991, when two Koreas jointly declared they would make the peninsula nuclear-free.

The latest war of words between Trump and the North, ruled by young leader Kim Jong-un, unnerved many in the South, even though it has become largely used to hostile rhetoric from its neighbor.

A conflict between the North and the United States could have devastating consequences for Asia’s fourth-largest economy, with Seoul within range of Pyongyang’s vast conventional artillery forces.

“A catastrophe is looming,” the South’s top-selling Chosun daily said in an editorial this week.

“All options, even those considered unthinkable so far, must be on the table.”  —WITH A REPORT FROM AFP