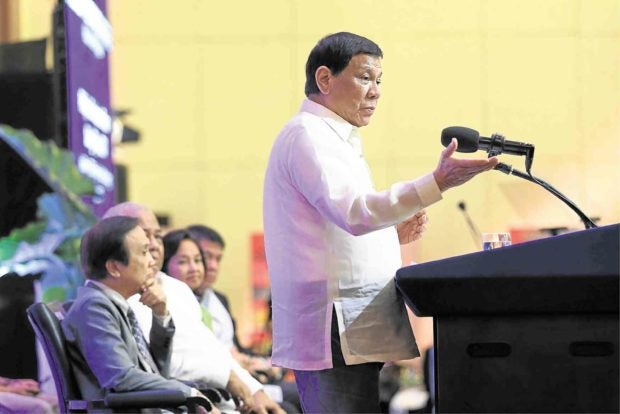 President Duterte on Wednesday night announced he planned to appoint 24 commissioners to draft a Constitution that would shift the country toward federalism and end the Moro secessionist rebellions in Mindanao.

The President for the first time outlined his plan to transform the unitary government with the center of power in Manila a day after the House of Representatives received an 83-page working draft of the “Philippine Federal Constitution.”

He did not give a name to his initiative but recalled that President Corazon Aquino appointed a 50-member commission that drafted the 1987 Constitution.

This was later approved in a plebiscite, junking the 1973 Constitution promulgated a year after President Ferdinand Marcos declared martial law.

“A constitutional convention would really be expensive. Now, do not tell me that the composition of that constitutional body would be wiser, would be more honest, and would not be protecting a vested interest,” Mr. Duterte told businessmen in Mandaluyong.

“I suggest that we appoint 24 commissioners. If you want, we could put there all the retired justices. Few civilians, about five … like what happened during Cory. But this is my take,” he said.

Chief presidential legal counsel Salvador Panelo, however, said the President might have been thinking of appointing an advisory body that would recommend amendments  to the 1987 Constitution for approval of Congress, sitting as a constituent assembly.

The President in May issued an executive order creating a “consultative committee” to review the 1987 Constitution.

“If you have a constitutional convention, you will have to pay two [delegates] per district. They will ask to have their own office and hold debates when they don’t have brains. It will just be the same,” Mr. Duterte said.

“I’m sure we will end up with something like the same structure … No, no, the same embodiment of a … maybe a democracy … Maybe structural change. But you will remember me for this,” he said, referring to his proposed shift to federalism, one of the main platforms of his campaign for the presidency.

“I am sure when I am gone, and everything is not all right, you will remember me,” he added.

If the country does not move to federalism, the President said, the conflict in Mindanao would only worsen, especially with Islamic State (IS)-inspired militants on a rampage.

“If you do not reconfigure the unitary type of government now, which is the one that we’re using, and if there is no change in Mindanao, there will be no peace until the end of time for the Philippines,” he said.

“If you do not force the issue, there will always be war. And remember that this time, there is a new element that has entered the picture—[the Islamic State],” he added.

“We are lucky because Murad of the MI(LF)  and Nur don’t really want it. They are not into extremism, too,” he said.

The two secessionist groups could fall under the influence of Islamic extremism if the government did  not provide a Bangsamoro homeland, the President said.

“If we are not ready to go federal, let us begin with a regional structure … and give to the Muslims. Let’s leave it to them,” he added.

Senate Minority Leader Franklin Drilon said on Thursday that only Congress, serving as a constituent assembly, or a constitutional convention could amend the entire 1987 Constitution  and the changes should be submitted to the people for their approval in a plebiscite.

“We are prepared to receive any recommendation of the President and we would debate on that as well as debate on the best mode to amend the Charter,” he said.

Drilon, chair of the Senate committee on constitutional amendments, recalled that the President had signed a directive seeking the formation of a constitutional commission but that he was unaware  if appointments had been made to the panel. —WITH A REPORT FROM CHRISTINE O. AVENDAÑO