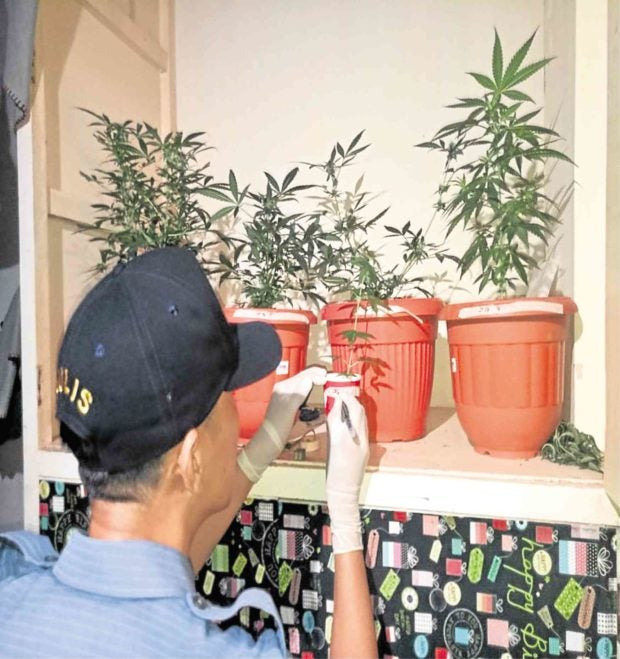 Like most people their age, college students Dulce Amor Carcosia and Joshua Gregorio search online for things that they need.

But instead of shopping for clothes or the latest gadget, Carcosia, a senior veterinary medicine student of the University of the Philippines Los Baños (UPLB), and her boyfriend, Grogorio, an information technology student of Laguna State Polytechnic University (LSPU), took advantage of technology to buy marijuana seeds.

On Thursday, a complaint was filed against the couple after a police raid discovered that they were growing and selling marijuana in Los Baños, a university community.

“According to them, [you] just [have to] go to eBay and click on ‘cannabis.’ They get them for like P1,300 per five seeds and (once grown), they sell the leaves for P1,500 per gram,” said Supt. Arvin Avelino, Los Baños police chief, in a telephone interview.

He said the marijuana seeds were “imported” but the suspects were not sure from which country these came.

According to Avelino, the type of marijuana seized from the couple does not grow as big as the marijuana plants grown in the Philippines.

The police, armed with a search warrant, found more than 20 plastic and paper cups with marijuana seeds and seedlings in it, along with a glass pipe and a weighing scale, when they raided the suspects’ apartment unit on Palm Drive in Barangay Batong Malake at 3 a.m. on Wednesday.

The couple’s apartment unit is located right outside the UPLB campus although the access to it is through the school’s main gate.

Avelino could not say how long the couple had been involved in marijuana cultivation but the police had been getting reports of students smoking marijuana near the LSPU campus, which was near UPLB.

Their investigation led them to the couple.

Dr. Portia Lapitan, UPLB vice chancellor for academic affairs, said they were “saddened and surprised” by the involvement of one of their students in the illegal activity.

The university reached out to Carcosia in detention and also notified her parents.

“We don’t know what made her do it,” Lapitan said.

She said Carcosia would face disciplinary action, of which the maximum penalty, “considering the gravity” of her offense, could be expulsion from UPLB.

The police filed charges of illegal possession and cultivation of marijuana, a nonbailable offense, against the couple on Thursday.

In Cebu City, a junior education student was arrested after P12-million worth of “shabu” (crystal meth) was recovered from her and a companion during a drug bust on Wednesday night.

Mheacy Empasis, 23, and her companion, Trinidad Lumactud, 46, are facing charges for violating the Comprehensive Dangerous Act of 2002.

Police said Empasis was a “Level 3” drug pusher who could sell least 200 grams of shabu per week.

Seized from Empasis were 1.07 kilograms of shabu worth P12.6 million.

Navida said investigators were checking if Empasis was also selling shabu to her classmates. Police, however, declined to name Empasis’ school.

According to Navida, Empasis is a frequent visitor of her boyfriend, Layme Parba, who is detained at the city jail on drug charges.

Empasis denied that she was selling illegal drugs although she admitted that she and Parba were in a relationship.

Lumactud said she believed that the lawmen’s target was her son, Berto, who was not around during the drug bust. —WITH A REPORT FROM BENJIE TALISIC