Asteroid to shave past Earth inside Moon orbit – ESA 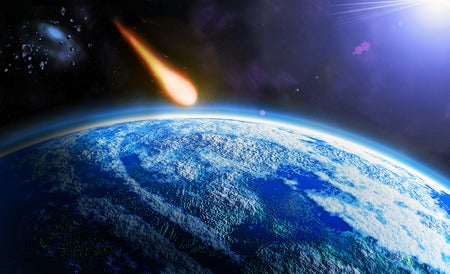 PARIS, France – An asteroid the size of a house will shave past Earth at a distance of some 44,000 kilometers (27,300 miles) in October, inside the Moon’s orbit, astronomers said Thursday.

The space rock will zoom by at an eighth of the distance from the — far enough to just miss our geostationary satellites orbiting at about 36,000 kilometers, according to the European Space Agency (ESA).

“It will not hit the Earth,” said Detlef Koschny of ESA’s “Near Earth Objects” research team. “That’s the most important thing to say.”

The asteroid, dubbed TC4, first flitted past our planet in October 2012 — then at about double the distance before disappearing. It is about 15-30 meters (49-98 feet) long.

Scientists expected the asteroid to return for a near-Earth rendezvous this year, but did not know how far.

Now, the European Southern Observatory’s Very Large Telescope in Chile has managed to track down the rock and determine its distance.

“The farthest satellites are 36,000 kilometers out, so this is indeed a close miss,” he told AFP, adding it was nothing to lose sleep over.

“As close as it is right now, I think this prediction is pretty safe… meaning that it will miss.”

Read Next
2 cops killed, 4 hurt in Catanduanes NPA attacks
EDITORS' PICK
SMDC’s Bloom Residences: A master planned community that cares for your health and wellness
COVID-19 cases in PH pass 3.2 million mark with 37,154 new cases — DOH
Over 3 Million worth of prizes to be won at Smart Padala’s SENDali Manalo Promo!
Upsilon, Unilever give ‘real talk’ on climate change crisis
What to expect as Metro Manila starts ‘no vaccination, no ride’ policy on Monday
Metro Manila’s daily COVID-19 growth rate drops to 2% — Octa Research
MOST READ
Thailand records first Omicron death
‘Not my loss’: Did Kris Aquino just comment on her breakup with Mel Sarmiento?
Prince Harry sues for UK police protection
Ivana Alawi tests positive for COVID-19, urges public to comply with health protocols: ‘No one’s above the law’
Don't miss out on the latest news and information.