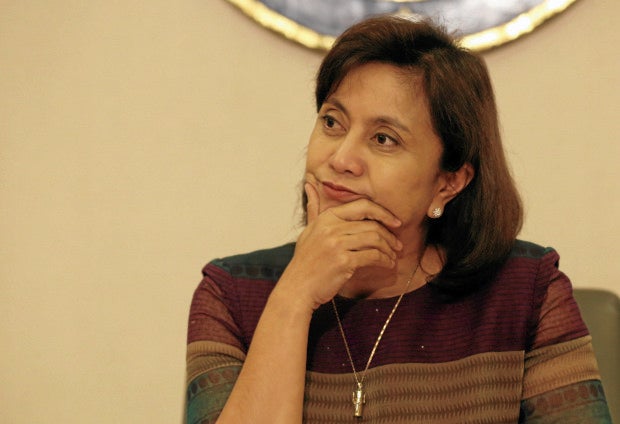 Vice President Leni Robredo officially but quietly took the helm of the Liberal Party (LP) as its chairperson during an unannounced meeting of party leaders last Wednesday.

Addressing an audience that included her defeated 2016 running mate Mar Roxas, Robredo said the LP must rebuild itself and focus on grassroots campaigns, “not so much on politicians,” Ifugao Rep. Teddy Baguilat Jr. told the Inquirer.

From their interim appointments, Robredo was formally elected LP chair, along with Sen. Francis Pangilinan, LP president, and former President Benigno Aquino III, who was absent, its chairman emeritus, in the national executive committee meeting held at the University of the Philippines.

Baguilat said the meeting was deliberately “low-key” considering the political climate and the reduced numbers of the once-dominant party.

In attendance were other Liberal stalwarts including Sen. Franklin Drilon, the LP vice chair, Occidental Mindoro Rep. Josephine Ramirez-Sato, the LP treasurer, as well as Representatives Edcel Lagman of Bicol and Raul Daza of Northern Samar.

“It’s quite telling that from a big hotel, we’re now having a meeting at the University Hotel,” said Baguilat, a leader of the “Magnificent Seven” opposition bloc at the House of Representatives.

In his own message, however, Roxas rallied the Liberals to keep the spirit, saying that though they were defeated in the 2016 elections, they remained in good fighting position, according to Baguilat.

“We believe we remain a critical force on certain issues like martial law,” Baguilat said.

Robredo’s staff, which regularly apprise reporters about her schedule, kept quiet about the morning meeting with the LP. The only announced public appearance of Robredo was her attendance at a newspaper’s anniversary celebration on Thursday evening.

In her speech, according to Baguilat, the Vice President focused on the need for LP to recruit members from the private sector, particularly “younger or new blood.”

“It’s hard to attract politicians now because you wouldn’t expect them to show their colors now,” Baguilat said, citing the adversarial nature of President Duterte’s relationship with the LP.

At the House of Representatives, many Liberals have defected to the ruling Partido Demokratiko Pilipino-Laban party, which boasts a “supermajority” in both chambers.

From a membership of more than 100 Liberals at the House during Aquino’s administration, there are now only fewer than 30.