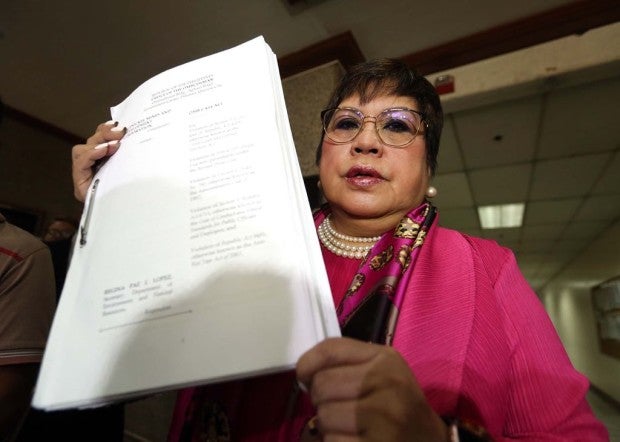 Commission on Elections (Comelec) Chair Andres “Andy” Bautista should be removed from office to protect the integrity of the institution, high-profile lawyer Lorna Kapunan said on Tuesday amid allegations of the poll chief’s ill-gotten wealth.

“Sa mga institutions natin dapat ang pinakamalinis diyan ay Comelec (Of all our institutions, the Comelec should be the cleanest), because it is Comelec that determines who will lead this country,” Kapunan said in an interview on DZIQ Radyo Inquirer 990.

“’Yan ang nakalagay sa constitution natin (That is what is indicated in our constitution). Comelec shall be in charge of clean—clean, orderly, honest, and credible elections. Kung ganyan ang chairman natin, ay dapat tanggalin na yan sa pwesto (If our chairman is corrupt, he should be removed from office),” she added.

Kapunan is a friend and former legal counsel of Bautista’s estranged wife, Patricia Bautista, who accused the Comelec Chair of amassing illegal wealth amounting up to P1.2 billion since he joined the government as Presidential Commission on Good Government chairman in 2010.

Kapunan said it is “worrying” that the country’s “sacred institutions” are being attacked and hinted at the House of Representatives to file an impeachment complaint against Bautista.

The lawyer cited the case of the late Chief Justice Renato Corona, who was impeached for failing to declare his properties in his Statement of Assets, Liabilities, and Net Worth (SALN).

“P30-million worth lang ‘yon, na-impeach na siya (yet he was already impeached). Compared po itong P1.2 billion—P176 million lang ang declared. Ano ibig sabihin no’n? I-explain niya (Compared here where he only declared P176 million out of his supposed wealth worth P1.2 billion. What does it mean? He should explain),” she said.

Kapunan said the allegations against Bautista puts into question the credibility of the 2016 elections, especially that the poll chief had “secret” meetings with Smartmatic, Comelec’s technology partner, in Washington D.C.

“Why will you meet Smartmatic under those circumstances? Dapat ikaw ang pupuntahan ng Smartmatic dito sa Pilipinas [para] transparent diba (Smartmatic should meet you here in the Philippines for transparency, right)?” she said.

Kapunan also dared Bautista, who accused her of tampering financial documents, to prove his allegations against her.

“How can you manipulate, how can you fabricate bank passbooks? Certified passbooks, bank statements ng offshore accounts niya?” she said. IDL