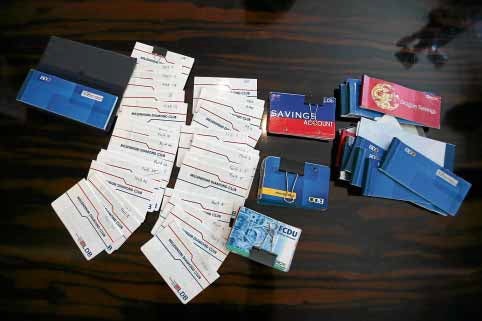 Election chief Andres Bautista received commissions for referring companies, such as Smartmatic, Baseco and United Coconut Planters Bank (UCPB), to DivinaLaw, one of the country’s fastest-growing law firms, his wife alleged in a sworn statement.

Smartmatic is the company that provided the vote counting machines for the 2010, 2013 and 2016 elections in the country. Baseco and UCPB are among the companies sequestered by the Presidential Commission on Good Government (PCGG), which is tasked with recovering the ill-gotten wealth of the late dictator Ferdinand Marcos and his cronies.

Bautista was chair of the PCGG from September 2010 until he was appointed head of the Commission on Elections (Comelec) in May 2015.

Patricia submitted several pages of what appeared to be commission sheets with different amounts from 2015 to 2016 to the National Bureau of Investigation on Aug. 1.

The Inquirer could not independently verify which among the figures stated were the actual commission that Bautista allegedly received.

In an interview with the Inquirer on Sunday afternoon, Bautista did not deny that he was “close” to Divina.

He said Divina was not only one of his lawyers but also the lawyer of his stepfather-in-law, Dr. Daniel Vazquez.

Bautista confirmed what his wife said in her affidavit that Divina was a godfather to their eldest son.

Patricia described Divina as “one of Andy’s best friends.”

The Inquirer on Monday went to DivinaLaw office in Makati City to get the side of Divina but his personal secretary said he was out in a meeting.

Cheer Mae Ecarma, from the law office’s corporate affairs, later told the Inquirer that Divina would not be issuing a statement. “We won’t be making comments but we are preparing legal actions,” she said.

Asked what the legal action was about, Ecarma declined to expound. “No further details,” she said.

Told about the commission sheets found by his wife, Bautista said: “These are not public funds … . It’s not a commission but it’s like a referral. This is private and does not involve government.

“It was an arrangement we had even before I joined [the] government but these are small amounts,” the Comelec chair added.

Bautista told the Inquirer in a phone call on Monday that the referral fees were paid “but never for companies where I will have potential conflict of interest,” referring to his post as a government official.

He accused his wife of embellishing and fabricating the documents she claims to have against him.

“I question the genuineness of the documents. These are small amounts but they are reflected on my SALN (statement of assets, liabilities and net worth). And the taxes are paid for all of these,” Bautista said.

The Comelec chief also said he would file cases against his wife this week.

One column in the commission sheets were labeled “Lawyers” but indicated only initials. The most prominent were “NTD,” which could refer to Divina himself and “ECE,” which could stand for Estrella C. Elamparo, one of the law firm’s senior partners.

Elamparo was the lawyer who questioned the eligibility of Sen. Grace Poe as a presidential candidate in the 2016 national elections.

Patricia, in her affidavit, said she was “highly suspicious” of the transactions that she saw on the commission sheets.

“It would, thus, appear that Andy secured the services of DivinaLaw, Nilo’s law firm, in order to profit from his (Andy) position in the Comelec. Based on the documents I found, Nilo issued several checks in Andy’s name and that of his family members, as Andy’s commission for assisting the law firm’s clients with the Comelec,” she said.

“What made me highly suspicious is that Nilo’s law firm has been handling, among others, government clients such as Baseco and UCPB, two government entities that Andy constantly dealt with while he was the PCGG chair,” she added.

Patricia said her impression was—based on the commission sheets she found and the checks—that her husband was getting “commission from Nilo, while he was/is in active government service.”

“Surely, a private practitioner such as Nilo would not give commission or some form of incentive to Andy if it wasn’t for any favor or service that he (Andy) had done for him (Nilo).

“However, it appears that Andy would get some sort of commission from Nilo for the clients that his (Nilo’s) law firm handled before the Comelec as well as other private people and institution,” Patricia said.

Patricia said her husband could be liable for criminal violations under the Anti-Graft and Corrupt Practices Act and the Anti-Money Laundering Act.

She mentioned that she was aware that her husband could be impeached for the violations.

The Bautista couple are embroiled in a bitter marital dispute that has dragged on over the past four years.

The Comelec chair accused his wife of extortion, claiming that she wanted P620 million as settlement.

Bautista said he could not afford such a staggering amount, even if he has substantial savings from his work as a private citizen before he joined the government in 2010.

Patricia’s camp vehemently denied that she had asked for the amount. —WITH A REPORT FROM ERIKA SAULER