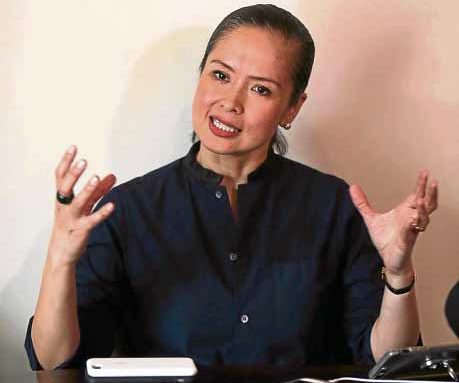 Patricia Paz “Tish” Bautista is the daughter of socialite Baby Cruz. Despite this, she has lived a “quiet, small life,” Bautista said.

Patricia, 47, managed her mother’s Franck Provost salon chain and foundation. She is also into energy healing and aura reading, which is why socialites call her “weird and crazy,” she said.

Talking to reporters on Friday, Patricia said she was aware she would be in the middle of a firestorm once her allegations of corruption against her husband, Commission on Elections (Comelec) Chair Andres Bautista, became public.

“My whole objective is to have peace. This might be the most inefficient way to have a peaceful life but this seems to be the only recourse at this point. I just want to be with my children and just live in peace,” Patricia said.

She is aware that she is the villain in the eyes of others, especially since she is also estranged from her own mother, she said.

She said she knew she was accused of stealing someone else’s boyfriend and of straying.

“People can’t blame me for everything. If they don’t get along, that is not my fault,” she said, referring to the high-profile couple whose breakup is being blamed on her.

Patricia said it hurt her that she was estranged from her mother and that Cruz was even closer to her husband than her.

Cruz declined to discuss why she was estranged from her daughter, although she said she was also hurting from the situation.

Patricia does not deny that she reads people’s aura and does energy healing. It is a gift, she said, that she discovered after the death of her father some 20 years ago. She was a shy child, she said. And she was very close to her father.

“I was very sad because I missed him. One time, shortly before my 25th birthday, I just kept hearing his voice and he was asking me what I wanted for my birthday. So I said, ‘I just want to be able to talk to him,’” Patricia said.

Soon, she was able to develop her gift. Years later, she engaged in business related to energy healing. She became a business partner of the man a number of people insisted was her boyfriend.

Before, Bautista kept quiet about Patricia’s rumored affair. But the Comelec chair is now open to talking about it, accusing his wife of extortion and wanting to run away with her alleged boyfriend with his (Bautista’s) money.