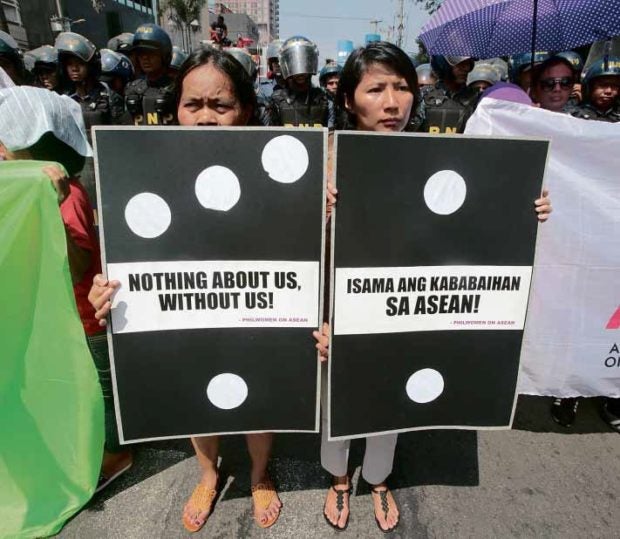 STREET ACTION Issues affecting the poor have always been neglected by the Asean since its founding 59 years ago, according to protesters, including staff members of the Women’s Legal and Human Rights Bureau who gathered along T.M. Kalaw Street in Manila. —GRIG C. MONTEGRANDE

An administration critic on Monday warned against the “rising tide of authoritarianism” in Southeast Asia as exemplified by the populist leadership of President Rodrigo Duterte.

Speaking at a news briefing, former Akbayan Rep. Walden Bello challenged the Association of Southeast Asian Nations (Asean) to make a firm stand to promote respect for human rights and other basic freedoms.

“The Philippines is in a trajectory toward a dictatorship, and … is in transition to fascism with the government of Mr. Duterte,” Bello said.

He said other governments in the region, particularly Indonesia, Cambodia, Malaysia and Thailand, were “unfortunately moving away from respect for human rights.”

For example, he said Myanmar had recently blocked the entry of human right investigators from the United Nations who were supposed to look into the reported mass killings and torture of Rohingya Muslim by state forces.

He surmised that the actions of the Myanmar government, led by Nobel laureate Aung San Suu Kyi, were meant to “placate” the military and that they were largely “influenced by not-savory characters in the leadership of the Asean.”

“The great challenge that we face today is how [to] confront and reverse this rising tide of authoritarianism in the Asean,” Bello said.

Jelen Paclarin, steering committee chair of the Asean Civil Society Conference, lamented how the Asean opted to decline their request for a dialogue during the meeting of the foreign ministers of the regional bloc in Manila.

The issues affecting the poor have always been neglected by the Asean since its founding 59 years ago, said Paclarin, who is also executive director of the Women’s Legal and Human Rights Bureau.

Presidential spokesperson Ernesto Abella said Bello “needs to view the President’s actions in the continuum of his constitutionally mandated authority to suppress and prosecute elements that threaten the peace and order of the nation.” —With a report from Philip C. Tubeza