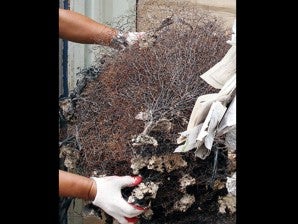 A WORKER shows to journalists some of the black corals confiscated last week and turned over to the Protected Areas and Wildlife Bureau at the Bureau of Customs area in Manila. NIÑO JESUS ORBETA

MANILA, Philippines—Weeks after the Bureau of Customs foiled a plot to smuggle out of the country over P35 million worth of endangered turtles and other marine life, another illicit shipment containing sacks of rare black sea corals was intercepted in Cebu province.

Customs officials suspect that the P15 million worth of black sea corals shipped from Manila and seized in Cebu on May 19 had something to do with their earlier catch of dead rare sea turtles, black corals and sea shells from Cotabato.

In a report to Customs Commissioner Angelito Alvarez, Customs Police Director Nestorio Gualberto said his team was investigating the possible connection of the Cebu shipment to the Cotabato seizure, touted as the bureau’s biggest of its kind.

Experts believe that about 7,000 hectares of a “reef complex” were destroyed when poachers harvested 161 sea turtles and over 21,000 sea shells and black corals off the waters of Cotabato province.

Customs police discovered the most recent illegal shipment of black corals on board the MV Lorcon Manila owned by Lorenzo Shipping Corp. following a tip that it was being transported as “scrap metal,” Gualberto said.

A check of the shipment in coordination with Dang Go, sales coordinator of the shipping firm, upon its arrival in Cebu last week showed that the cargo contained an assortment of sea corals, he said.

At least 168 sacks containing 375 pieces of the endangered marine species, identified by the Bureau of Fisheries and Aquatic Resources (BFAR) as “black sea fan” corals, were accounted for, he said. 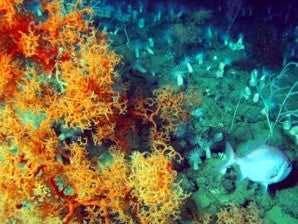 This photo taken by Ken Sulak for the US Geological Survey.

The shipment was consigned to a “Cebu Junk Shop,” which turned out to be fictitious.

The law prohibits any person or corporation to gather, possess, sell or export ordinary, precious and semiprecious corals whether in raw or in processed form. The penalties range from six months to two years in prison and a fine of as much as P500,000.

Black corals are among the species protected by the Convention on the International Trade in Endangered Species of Wild Fauna and Flora.

Reacting to the seizures, President Benigno Aquino III’s spokesperson, Edwin Lacierda, on Wednesday said: “We have a problem in protecting our archipelagic waters. That is a concern for us.”

Environment Secretary Ramon Paje on Wednesday directed wildlife experts to identify and prosecute those behind the Cotabato shipment.

Exequiel Navarro, consignee of the seized contraband, has been charged with violation of the Fisheries Code.

Paje said he had instructed lawyers to determine if Navarro could also be charged with violation of the Wildlife Resources Conservation and Protection Act, which punishes the destruction of endangered species. The penalty is a maximum jail term of 12 years and a fine of up to P1 million.

“We shall certainly act with dispatch to make sure that the suspects face the punishment to the fullest extent,” Paje said in a statement.

Navarro has indicated that he could identify the financier of the harvest of corals, and the people behind the smuggling. With reports from Leila Salaverria and Norman Bordadora