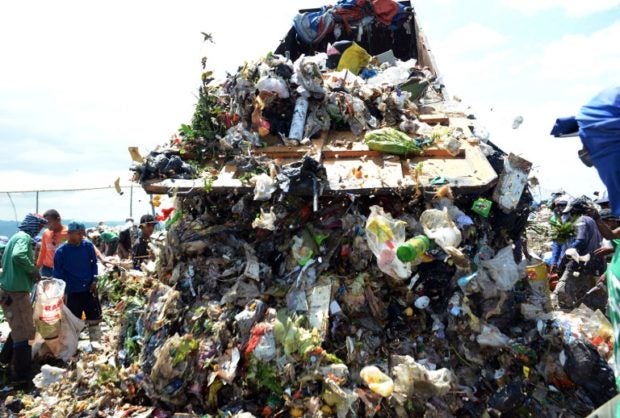 This photo taken on March 5, 2013, shows scavengers collecting recyclable materials at a temporary landfill in Payatas, Quezon City. The Environmental Management Bureau ordered the closure of the Payatas dumpsite on August 2, 2017, amid fears of a trashslide following days of intermittent heavy rain spawned by the southwest monsoon or habagat. AFP FILE

Environmentalist groups on Sunday supported the closure of the Payatas dumpsite, stressing that it is “legally justified and long overdue.”

According to Section 37 of Republic Act 9003, or the Ecological Solid Waste Management Act of 2000, open dumpsites should have been closed in 2004, and the controlled dumpsites in 2006.

“It’s time barangay-based ESWM should be fully implemented by all local government units, as mandated by R.A. 9003,” Papa added.  “We have proof this can be done.  At the same time, the closed dumpsite should be rehabilitated.”

The Payatas open dumpsite was converted to a “controlled disposal facility” in 2004 and then closed in 2010. The Payatas “sanitary landfill,” which started operations in 2011, will be closed in December this year as it is already near its carrying capacity limit.

On Wednesday, the Environmental Management Bureau (EMB) ordered the temporary closure of the Payatas landfill to review the environmental clearance certificate (ECC) of IPM Environmental Services, the landfill operator.

The move of the EMB-NCR was to prevent accidents such as “trashslides” and injuries due to the heavy monsoon rains enhanced by Typhoon “Gorio” last week.

Despite the groups’ assertion of shutting down the dumpsite, they said this should not be used to justify the construction of a “waste-to-energy incineration plant” to burn Quezon City’s massive garbage estimated at 2,700 tons per day.

“But Quezon City residents must be vigilant in opposing the plan to establish an incinerator plant to replace the dump,” said Papa.

“Among a long list of concerns, waste incineration generates dangerous byproducts such as ash residues that should be strictly managed as hazardous waste. Some 30 tons of ash is produced for every 100 tons of garbage incinerated. We cannot allow such toxic ash to get dumped in Payatas, which is so near the La Mesa Dam and watershed reservation,” he added.

The advocate cited Section 48 of R.A. 9003, which prohibits “the construction or operation of landfills or any waste disposal facility on any aquifer, groundwater reservoir, or watershed area.”

“Hauling garbage to the so-called sanitary landfills in Navotas City and in Rodriguez and San Mateo, Rizal, offers no real solution to Quezon City’s costly garbage problem. The only thing it does is to keep the ugly trash out of our sight, out of our minds, for Quezon City residents, that is, while further destroying another community where it will be dumped,” said Daniel Alejandre, zero waste campaigner of EcoWaste Coalition.

“Over P1 billion is spent annually for garbage hauling and dumping. This should be spent, instead, for sustained waste prevention and reduction programs, public education and law enforcement action,” he suggested.

According to R.A. 9003, waste avoidance and volume reduction through segregation at source, composting, recycling, reuse are best practices in ESWM, excluding the open burning and incineration of trash. CBB