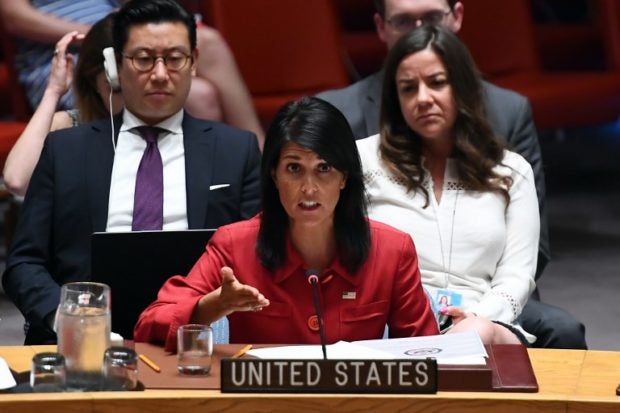 US Ambassador to the United Nations Nikki Haley speaks during a Security Council meeting on North Korea at the UN headquarters in New York on July 5, 2017. The Security Council approved on Saturday, August 5, 2017, a US sponsored resolution imposing a ban on North Korean exports worth $1 billion after it launched its first intercontinental ballistic missile.  AFP

The sweeping measures were the first of that scope to be imposed on North Korea since US President Donald Trump took office and highlighted China’s willingness to punish its Pyongyang ally.

The resolution imposed a full ban on exports of coal, iron and iron ore, lead and lead ore as well as fish and seafood by the cash-starved state — stripping North Korea of a third of its export earnings estimated at $3 billion per year.

US Ambassador Nikki Haley said the stiffer measures brought the penalty imposed on North Korea for its ballistic missile tests “to a whole new level” and that the council had put leader Kim Jong-Un “on notice.”

“This is the most stringent set of sanctions on any country in a generation,” Haley told the council after the vote.

The resolution also prevents North Korea from increasing the number of workers it sends abroad whose earnings are another source of revenue for Kim’s regime.

If fully implemented, the measures would tighten the economic vise around Pyongyang as it seeks to develop its missile and nuclear programs.

The United States entered into negotiations with China a month ago on the new resolution after North Korea launched its first intercontinental ballistic missile on July 4 which was followed by a second test on July 28.

But the measure does not provide for cuts to oil deliveries to North Korea as initially proposed by the United States — a move that would have dealt a serious blow to the economy.

The new raft of measures are the seventh set of UN sanctions imposed on North Korea since it first carried out a nuclear test in 2006.

Sanctions not an end

The United States has put heavy pressure on China, which accounts for 90 percent of trade with North Korea, to enforce the sanctions and the fate of these measures largely hinges on Beijing’s cooperation.

China and Russia had resisted the US push, arguing that dialogue with North Korea was the way to persuade Pyongyang to halt its military programs.

Chinese Ambassador Liu Jieyi said the resolution “does not intend to cause a negative impact” to North Korea’s people and stressed that it called for a return to talks on denuclearization of the Korean peninsula.

“The fact that the council adopted this resolution unanimously demonstrates that the international community is united in its position regarding the nuclear issue of the peninsula,” said Liu.

Russian Ambassador Vasily Nebenzia stressed that sanctions “cannot be an end in themselves” but rather “a tool for engaging this country in constructive talks.”

Backed by its European allies, Japan and South Korea, the United States has maintained that tougher sanctions would put pressure on North Korea to come to the table.

As negotiations at the United Nations entered the final stretch earlier this week, US Secretary of State Rex Tillerson declared that Washington was not seeking regime change in North Korea and was willing to talk to Pyongyang.

Speaking to reporters after the council vote, Haley said “what’s next is completely up to North Korea.”

McMaster, in an interview with MSNBC, said Trump had told China’s President Xi Jinping it was no longer enough for North Korea to “freeze” its programs since it had already crossed “threshold capability” and the goal was now denuclearization.

South Korea’s foreign minister, meanwhile, held out a diplomatic olive branch Saturday, saying she was open to holding discussions with her North Korean counterpart at a security forum in the Philippines.

“If there is an opportunity that naturally occurs, we should talk,” Kang Kyung-Wha said as she landed in Manila on Saturday, according to South Korea’s Yonhap news agency.

North Korea’s top diplomat, Ri Hong-Yo, was attending the regional summit, which is hosted by the 10-member Association of Southeast Asian Nations (Asean).

Seoul last month proposed military talks with Pyongyang but the North refused to respond. Had they gone ahead, they would have been the first official inter-Korean talks since 2015. CBB

Read Next
Easing Cebu road woes: BRT to LRT
EDITORS' PICK
IATF to LGUs: Issue ordinances vs attacks on frontliners, COVID-19 patients
10 Filipinos positive for COVID-19 in UK, 7 in Ireland — envoy
Nograles: Cabinet members to donate 75% of monthly salary to aid COVID-19 fight
Diokno to Duterte: OK to make fun of buck tooth, but focus on people’s needs first
Robredo spox thanks Duterte for defending VP’s efforts vs COVID-19
Quick chat with Nicole Andersson: ‘You really don’t need much to be happy’
MOST READ
Coronavirus hotbed Rizal to shut borders on April 6
Gov’t mulling quarantine period extension of 15-20 more days
ADB warns PH against prolonged lockdown
Sotto on Isko Moreno’s call: We do our job without the media following our every move
Don't miss out on the latest news and information.