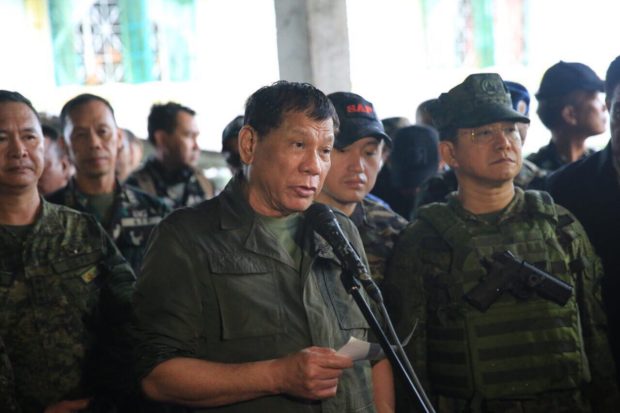 On Friday, Aug. 4 , 2017, a rain-drenched President Rodrigo Duterte spoke to troops in Barangay Kilala – a village close to Lilod – during his second visit in Marawi.

MARAWI CITY – Apparently further inspired by President Rodrigo Duterte’s second visit here on Friday, the military became more aggressive in its campaign against the remaining members of the Maute Group here on Saturday.

Ground battle also intensified as soldiers tried to move into the two villages in a bid to recapture them and break the control of some 80 remaining terrorists there.

On Friday, a rain-drenched Duterte spoke to soldiers in Barangay Kilala – a village close to Lilod – during his second visit here.

It was the closest that the President had gotten to any main battle area.

“This is nearing the end. A little more patience,” Duterte said at the Kilala command post.

He was driven to the post on a black SUV from the 103rd Infantry Brigade headquarters, where his chopper landed. He was accompanied by by Defense Secretary Delfin Lorenza and Gen. Eduardo Año, chief of the Armed Forces of the Philippines, along with other ranking military commanders.

“Just make sure that you remain alive when this war is over,” Duterte added.

A total of 119 soldiers had died since the fighting started, while close to 1,000 others had been injured.

Duterte said he visited the city again “because I want all of you to know that… I care for you.”

“I hope you will be able to clean up Marawi City and get rid of the terrorists,” he told soldiers who welcomed him in Kilala.

He also repeated his pledge of putting up a trust fund for the children of the troops.

“My promise is I will establish a trust fund of P50 billion when I go out of the presidency, that 50 billion will be dedicated solely to the education of your children,” he said.

He also cited the law on free tertiary education in state universities and colleges that he had signed into law.

He also hit former President Benigno Aquino III again, admitting that criticisms of his anti-drug war had hurt him.

Duterte also led the distribution of food packs to the soldiers and gave them G-Shock wristwatches.

He also gamely posed for groufies and selfies even though it was raining.

As the President was leaving, a group of soldiers was spotted lined up in front of a deserted building, where a sign that reads “Thank You Sir” was seen hanging. –With a report from Allan Nawal