Panda gives birth to twins at French zoo, but one cub dies 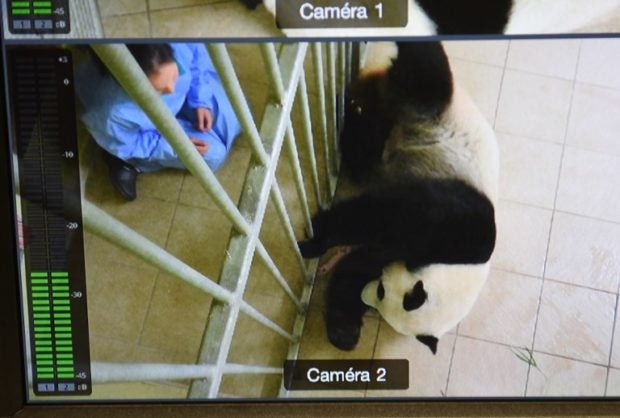 Screen capture shows the first cub on the ground between the arms of the female panda Huan Huan in Saint-Aignan-sur-Cher, central France, on August 5, 2017.
French zoo officials were doubly delighted on August 1 on learning that their pregnant panda is expecting not one but two cubs at the weekend. A final scan has revealed that Huan Huan, who is on loan to Beauval zoo in central France from China with her male partner Yuan Zi, is expecting twins on August 4 or 5. / AFP

SAINT-AIGNAN-SUR-CHER, France—There here was joy and pain for French zookeepers Friday as their female panda gave birth to twins, but one died soon afterwards.

But soon after birth, the first, which weighed just 121 grams (4.2 ounces), began having problems breathing and died despite the best efforts of zoo staff.

“It was too weak to survive. The Chinese experts, who have experience of this, saw it straight away,” zoo director Rodolphe Delord said.

“Our veterinary teams did everything they could to save it, but it was too small, too weak.”

But he said the second twin, which weighed in at a healthier 142.4 grams, was in “perfect health”.

The youngster has been put in an incubator so vets can give first-time mum Huan Huan a helping hand, zoo officials said.

Nine-year-old Huan Huan and her male partner Yuan Zi arrived at Beauval zoo in January 2012 on a 10-year loan from China after intense, high-level negotiations between Paris and Beijing — was carrying a single cub.

Breeding pandas is notoriously difficult and this is the first time a cub has been born in France.

The female panda is only in heat once a year for about 48 hours. The gestation period for pandas is a mere 50 days.

Huan Huan (meaning “happy”) and Yuan Zi (“chubby”) are the only giant pandas living in France.

The pair were brought together in February, in the hope they would mate, but it didn’t happen. In the end, the zoo performed an artificial insemination.

If all goes well with the birth, the surviving cub will leave Beauval in the next two to three years to be returned to China.

Read Next
Rebuilding Marawi: First 1K shelters to start rising in September
EDITORS' PICK
Nestlé Philippines’ ‘NESCAFÉ Plan’ bags Grand Anvil at PRSP 56th Anvil Awards
Smart reinforces superiority with best speed and mobile video experience in PH
Every Filipino home can now be a smart home with realme TechLife
New 3,045 COVID-19 cases push PH total active cases to 40,074
LTO’s P500-M deal for screws draws scrutiny
How to lose a PH genius: Wesley So officially a US citizen
MOST READ
How to lose a Filipino genius: Wesley So officially a US citizen
US lays out list of aid to ‘satisfy’ Duterte following VFA payment demand
Robredo on Sara Duterte leading poll surveys: Why are Filipinos drawn to leadership of this kind?
Rights lawyer survives attack by playing dead, loses all case files
Don't miss out on the latest news and information.