Australia police: Men tried to get bomb on Sydney plane 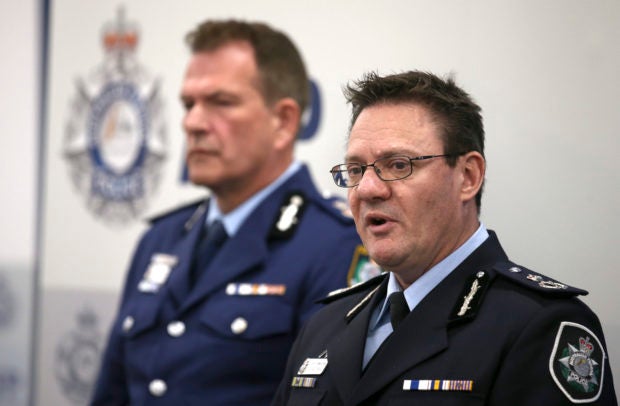 SYDNEY—Two men facing terrorism charges in Australia were involved in an aborted attempt to place an improvised explosive device on an Etihad Airways flight out of Sydney last month in a plot directed by the Islamic State group, police said Friday.

One of the men, a 49-year-old from Sydney, brought the device to Sydney airport on July 15 in a piece of luggage that he had asked his brother to take with him on the flight—without telling the brother that the bag contained explosives, Australian Federal Police Deputy Commissioner Michael Phelan told reporters. But for reasons still unclear, the bag never got past the check-in counter. Instead, Phelan said, the man left the airport with the bag, and his brother continued onto the flight without it.

“This is one of the most sophisticated plots that has ever been attempted on Australian soil,” Phelan said. “If it hadn’t been for the great work of our intelligence agencies and law enforcement over a very quick period of time, then we could well have a catastrophic event in this country.”

The details Phelan provided on Friday are the first that officials have released since four men were arrested in a series of raids in Sydney last weekend. Khaled Khayat, 49, and Mahmoud Khayat, 32, have been charged with two counts of planning a terrorist act. A third man remains in custody, while a fourth was released without charge. Khaled Khayat’s brother has not been charged in connection with the plot, because police believe he had no idea the bag contained explosives, Phelan said.

Lawyer Michael Coroneos appeared on behalf of Khaled and Mahmoud Khayat at a brief court hearing on Friday. They were refused bail and the case was adjourned until Nov. 14. Police have not detailed the men’s relationship.

“They’re entitled to the presumption of innocence,” Coroneos said outside court, declining to answer any other questions.

The components for the device, including what Phelan described as a “military-grade explosive,” were sent by a senior Islamic State member to the men in Sydney via air cargo from Turkey. An Islamic State commander then instructed the two men who have been charged on how to assemble the device, which police have since recovered, Phelan said.

After the July 15 bid failed, the men changed tactics and were in the early stages of devising a chemical dispersion device, which they hoped could release highly toxic hydrogen sulfide, Phelan said. No specific targets had been chosen, though an Islamic State member overseas had given the men suggestions about where such devices could be placed, such as crowded areas or on public transport.

Police had no idea either of the plans were in the works until they received a tip through intelligence agencies on July 26, Phelan said. They arrested the men on July 29.

The allegation that the Islamic State was able to ship explosives to Australia undetected was troubling, Phelan acknowledged.

“All the security agencies and those responsible for security of cargo and so on have put in place extra measures since that time,” Phelan said. “It is a concern that it got through, yes, it’s hard to deny that.”

“You would appreciate it is a very big job to screen, and Australia is a very open economy — there is an enormous number of packages moving both inward and outward on any given day,” Keenan told reporters. “But we’ve taken measures to improve screening.”

Phelan said police still don’t know precisely why the bag containing the explosives never made it past the check-in counter. Some theories are that it was too heavy, or that Khaled Khayat simply chickened out. After learning of the plot, Phelan said police made a similar mock IED and ran it through the airport’s luggage system, and it was detected by security.

If convicted, the men could face a sentence of life in prison. JPV