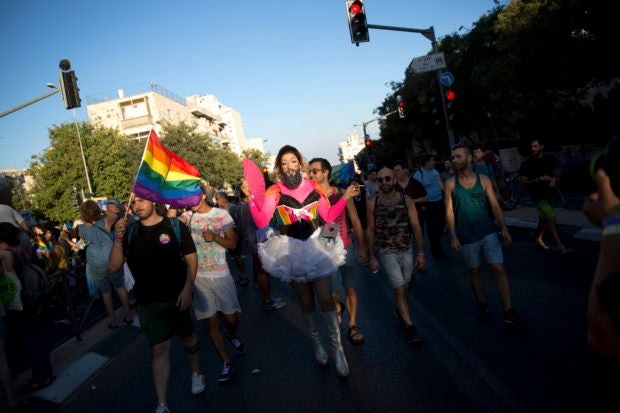 More than 10,000 people attended the parade through central Jerusalem, police said, with dozens of roads closed off by security two years after a 16-year-old girl was stabbed to death by an ultra-Orthodox Jew during the event.

All marchers were inspected before joining, with carrying a weapon of any kind prohibited.

Police said 22 people had been arrested before and during the parade, including one carrying a knife.

Many laid flowers under a picture of Shira Banki, who was killed at the 2015 march.

Banki was attacked by Yishai Shlissel, an ultra-Orthodox Jew who also stabbed five other people and is now serving a life sentence.

Shlissel had spent 10 years in jail after a similar attack on the 2005 Jerusalem Gay Pride march, and had been released just three weeks before the event, leading to criticism of the police.

Israel has the most open attitude to homosexuality in the Middle East, with a large and influential gay community.

Ahead of Thursday’s parade, one of Jerusalem’s two chief rabbis was quoted in local media as condemning it, saying it contradicted “the holiness of Jerusalem that is so important to us”.

“Holding the parade in the city streets is causing more damage to its supporters than benefiting them,” Rabbi Aryeh Stern said.

But Roi, an Israeli taking part in the march, said he thought the majority of Jerusalemites were tolerant of homosexuality.

“There is always going to be some part of the ultra-religious, ultra-Orthodox that don’t like us, but they have their own parade today,” he said, gesturing towards around 50 protesters opposed to the pride march.

Same-sex marriage is recognized but not performed in Israel, where there is no civil marriage, meaning that gay couples must travel abroad to wed.