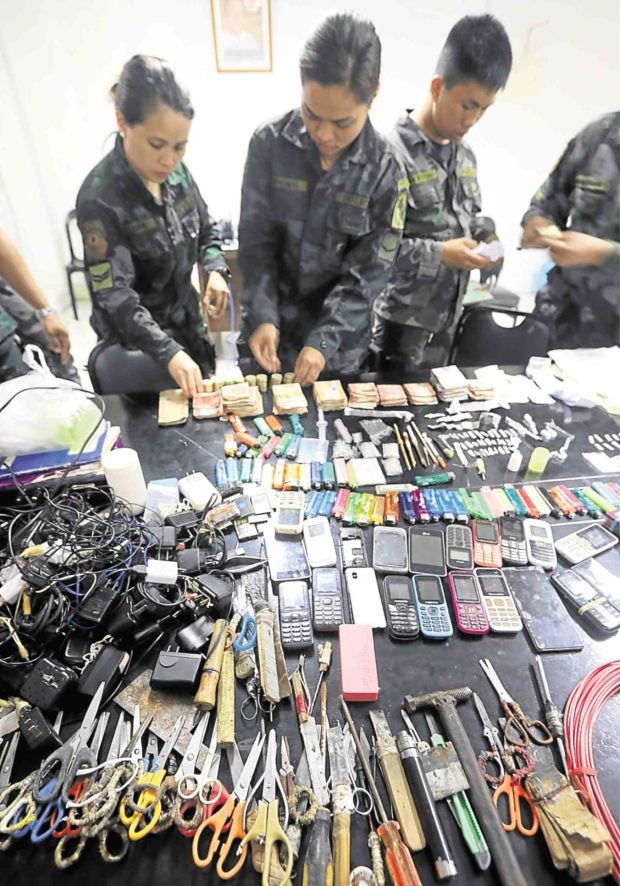 Members of the Cebu provincial police prepare an inventory of items seized from prisoners after a raid at Cebu Provincial Detention and Rehabilitation Center. —TONEE DESPOJO/CEBU DAILY NEWS

CEBU CITY — Police on Tuesday seized illegal drugs, gambling paraphernalia, money and weapons in a raid on a local prison known for its dancing inmates.

Operatives found more than 20 gambling tally sheets as well as lists of code names, number combinations and P18,000 worth of bet money during its Operation Greyhound at  Cebu Provincial Detention and Rehabilitation Center (CPDRC) in Barangay Kalunasan here.

“The items we found are enough proof that the inmates are involved in gambling inside CPDRC,” said Supt. Mario Baquiran, head of the police’s Provincial Public Safety Company.

CPDRC gained international prominence in 2007 when a video of the inmates dancing to Michael Jackson’s “Beat It” went viral after it was posted on YouTube, a video-sharing website.

Tuesday’s operation was the fifth raid on CPDRC since July last year.

Baquiran said he decided to conduct the raid after receiving a tip last week that 2 kilograms of shabu were smuggled into CPDRC.

The contraband was reportedly brought in together with food and cooking ingredients for the inmates. The drugs were found on the piles of egg trays in the CPDRC canteen.

Although policemen did not find the 2 kg of shabu reported by the informant, Baquiran believed that the drugs seized during the raid were part of the the contraband sneaked into the facility.

The rest, he said, may have been distributed elsewhere.

The PCSO has been running Swertres, which has three draws daily, to discourage people from patronizing illegal numbers games like “jueteng” and “masiao.”

Baquiran said that for every bet of P1, the winner in the illegal numbers game played in CPDRC would get P400.

Aside from tally sheets, police also recovered at least 15 sheets of paper in four cells.

Each sheet contained 10 code names and their corresponding three-digit combinations and bet amounts.

Some names were marked with a figure of a star, leading authorities to believe that these were inmates who got the winning combinations.

Baquiran said prison authorities had yet to identify the people involved in the gambling operation.

Chief Insp. Roland Aliser, head of the Cebu police’s Provincial Drug Enforcement Unit, recommended a revamp of jail guards at the provincial facility due to the possibility that some of them might have conspired with the inmates to allow the entry of illegal drugs.