Duterte on statement to abolish CHR: It was a joke | Inquirer News
Close
menu
search

Duterte on statement to abolish CHR: It was a joke 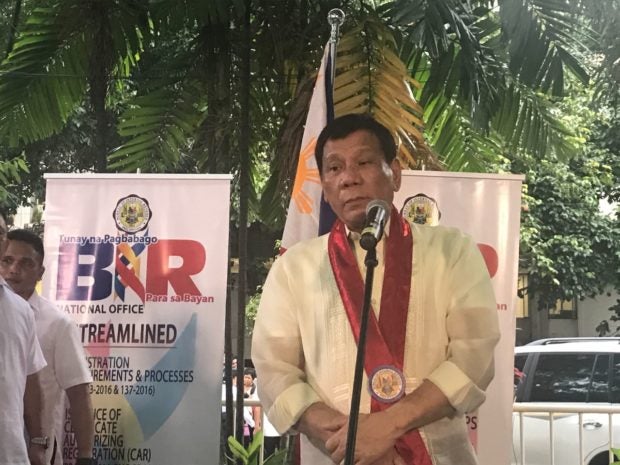 President Rodrigo Duterte talks with reporters after he attended the 113th founding anniversary of the Bureau of Internal Revuenue in Quezon City on Wednesday, Aug. 2, 2017. (Photo by NESTOR CORRALES / INQUIRER.net)

It was a joke.

President Rodrigo Duterte on Wednesday said his threat to abolish the Commission on Human Rights (CHR) was said in jest.

“Itong human rights, sabi ko, biro lang naman yung sinabi kong I will abolish you. I need Congress to do that,” Duterte said during his speech at the 113th anniversary celebration of the Bureau of Internal Revenue (BIR) in Quezon City.

The President has threatened to abolish the Commission on Human Rights (CHR), which has been critical of his administration’s war on drugs and alleged human rights abuses.

“And when the time comes, the CHR, this office, you are better abolished,” he told reporters in a press briefing after his second State of the Nation Address (Sona).

Duterte also said the Ombudsman should get a clerance from him before investigating his officials prticularly the police and the military.

But the President said on Wednesday that was also a joke.