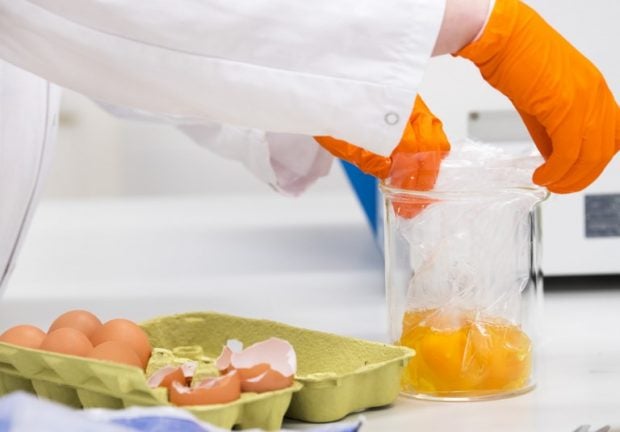 A laboratory assistant of the Dutch food and product safety board NVWA investigates eggs after fipronil was found in samples of eggs on August 1, 2017, in Wageningen. The chemical is classed as a moderately hazardous pesticide by the World Health Organization. In the Netherlands it is banned in the poultry sector.  AFP

THE HAGUE, Netherlands — Dozens of poultry farms have been closed across The Netherlands after a toxic insecticide is believed to have contaminated hundreds of thousands of eggs, Dutch officials said Tuesday.

Since Wednesday “about 180 poultry farms have been shuttered due to the presence of the suspect substance fipronil” which had been found in samples taken from “eggs, droppings and meat,” the Dutch food authority NVWA said.

About a million eggs being transported to Germany have also been recalled from the border with The Netherlands, it added.

The insecticide is commonly used in veterinary products to get rid of fleas, lice and ticks. But it is banned from being used to treat animals destined for human consumption such as chickens.

It is believed the substance was introduced by a Dutch business, named Chickfriend, which was called in to treat red lice, a nasty parasite in chickens.

“We are still estimating the number of farms which have been affected, and the analysis of 600 samples is still ongoing,” a spokesman for the NWVA told AFP.

The Dutch news agency ANP said there were about 1,000 poultry farms around the country.

In large quantities, fipronil, is considered to be “moderately hazardous” according to the World Health Organisation, and can have dangerous effects on people’s kidneys, liver and thyroid glands.

“Affected farms must have all eggs destroyed by a specialist firm and submit to the NWVA a plan to evacuate the birds’ droppings to preserve the environment,” the spokesman added.

Chickens can remain contaminated for between six to eight weeks.

Late Monday, the NWVA sent out a warning to consumers that eggs with the code X-EN-40155XX “had such elevated levels of fipronil that their consumption would present a serious public health risk.”

The NWVA was Tuesday still ensuring that the contaminated eggs were being taken off supermarket shelves and has advised people who may have bought them “not to eat them and to throw them away.”

Facing large losses, the poultry farmers say they were “cheated” by Chickfriend, which they blame for the incident.

The company appears to have “mixed the illegal substance with a legal one to improve its effectiveness,” Erik Hubers from the Dutch agricultural and horticultural association told the NOS broadcaster.

Chickfriend could not be reached Tuesday, with all calls by AFP going through to an answering machine with a message saying it was closed “for professional reasons”. CBB