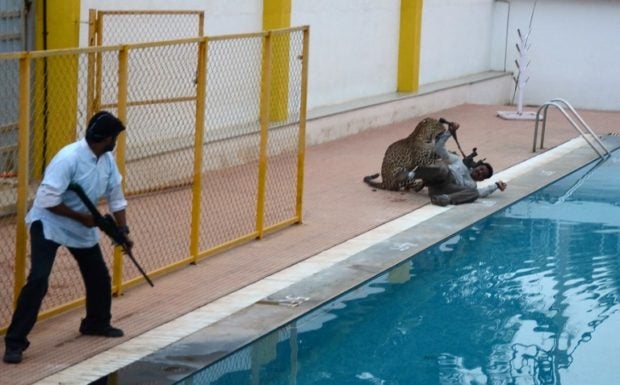 This file photo taken on February 7, 2016 shows an Indian man (L) with a tranquilizer gun watching as a leopard attacks a man identified by Indian media as wildlife conservationist Sanjay Gubbi (R) at a private school on the outskirts of Bangalore. Endangered elephants and tigers are killing one person a day in India as humans put a growing squeeze on their habitat, according to new government figures released late July 2017. AFP

New Delhi, India — Endangered elephants and tigers are killing one person a day in India as humans put a growing squeeze on their habitat, according to new government figures.

But man is in turn killing a leopard a day as the man-animal tussle for space reaches new heights.

According to the environment ministry, 1,144 people were killed in attacks across India in 1,143 days between April 2014 and May this year.

And there is no sign of the toll being cut.

The ministry said 345 tigers and 84 elephants were killed in the same period, mostly in poacher attacks. Elephants are targeted for their tusks.

“We are running awareness campaigns to minimize the casualties,” Das told AFP.

Elephants accounted for 1,052 human deaths and tigers 92, according to the figures released to parliament last week.

West Bengal state accounted for more than a quarter of deaths. The eastern state has nearly 800 elephants and is also home to famed Bengal tigers.

Last year,  a herd of wild elephants went on an hours-long rampage in West Bengal, killing five people and damaging vehicles and homes before being subdued with tranquilizer darts.

But tensions are also mounting elsewhere across the country. An elephant trampled to death four people, including a 12-year-old girl, in a village in southern Tamil Nadu state in June.

There have also been cases of elephants knocking people off scooters.

Most attacks on humans by elephants take place in so-called elephant corridors which they have used for centuries but are now being overrun by humans.

According to National Crime Records Bureau statistics, nearly 950 people were killed in animal attacks in 2015. But those statistics did not specify the nature of the incidents.

India has nearly 30,000 elephants and is home to half the world’s tiger population with some 2,226 of the big cats roaming its reserves, according to the last official count in 2014. Both are endangered species.

“Rampant killing of wildlife is ongoing in India. Hundreds of leopards, tigers and elephants are killed for their body parts,” Tito Joseph of the Wildlife Protection Society of India told AFP.

Fatality figures for the estimated 12,000 to 14,000 leopards living in the wild are becoming alarming, according to a 2015 census.

More than 1,436 of the animals have been killed since January 2014, according to the WPSI.

There are no figures on the number of humans killed by leopards, but experts say there are hundreds each year.