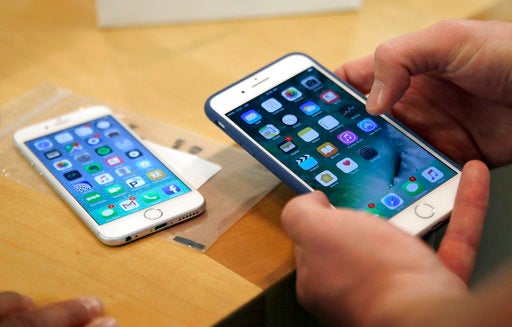 A Friday, Sept. 16, 2016 file photo of a customer setting up his new iPhone 7 Plus, right, as he switches from the iPhone 6 at the Apple Store on Michigan Avenue, Chicago, IL., during the release of the Apple iPhone 7. Dutch police arrested five Romanian men suspected of stealing iPhones worth 500,000 euros ($590,000) in a dangerous heist on a moving truck, a spokesman said Monday, July 31, 2017. AP FILE

THE HAGUE—Dutch police said Monday they had rounded up a gang of alleged Romanian iPhone thieves, who gained notoriety by clambering from their cars into moving trucks to pull off heists.

Five Romanian men were arrested at the weekend in a holiday park not far from the German border after 500,000 euros worth of iPhones were stolen from the back of a truck as it powered along the A73 motorway from the town of Horst.

During the night of July 24 to 25, a group of men approached the lorry in a car, and were spotted climbing through the sunroof as it was tailgating the truck carrying iPhones, Dutch police said in a statement.

“One of them managed to force open the back of the truck. Then one of the suspects boarded the truck, and began passing a large number of boxes containing iPhones out of the truck and down through the car-roof,” they added.

At least 17 similar thefts, nearly always involving iPhones, have been reported in recent years in Europe, in what police have dubbed “the Romanian method”.

Dutch police have been investigating such thefts since 2015, the daily Telegraaf reported, adding it was not yet clear if the whole gang had been caught.

The five men, arrested in the central village of Otterlo, are aged between 33 to 35 will appear in court on Tuesday.