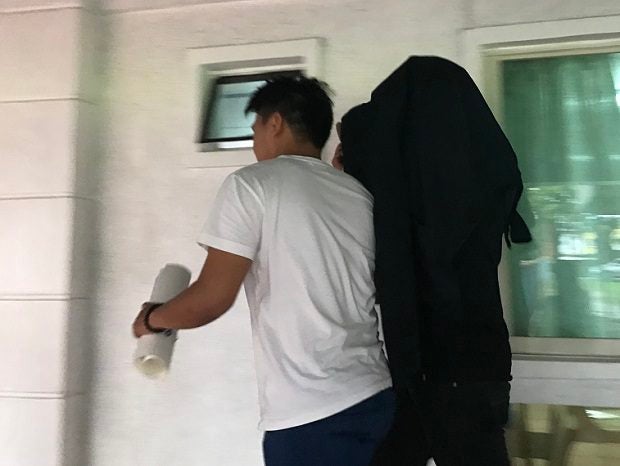 Fr. Arnel Lagarejos (covered in black jacket) is escorted out of the Marikina City Prosecutor’s Office after he was charged with violation of Anti-Trafficking in Persons Act on Saturday, July 29, 2017. PHILIPPINE DAILY INQUIRER / JODEE AGONCILLO

Friday night was not the first time Taytay, Rizal parish priest Msgr. Arnel Lagarejos had booked a 13-year-old girl through her pimp who was also a minor.

“They had met before. According to the girl, [Friday] would have been the third time,” Marikina police chief Senior Supt. Roger Quesada told the Inquirer in a phone interview on Sunday.

The 55-year-old Lagarejos, parish priest of the Parish of St. John the Baptist in Taytay, Rizal, was arrested by authorities on Friday night as he was taking the girl to a motel in Marikina City in his sport utility vehicle.

“The girl went with the priest because there was money involved. She said the priest paid her P2,500 per booking,” Quesada said.

According to him, Lagarejos  met the girl through the 16-year-old pimp who was her friend. The police, however, have yet to establish how and when the priest met the pimp.

“They did not know he was a priest,” Quesada said, referring to the two minors.

Lagarejos also hid this information from the police after his arrest last Friday. “He said he was self-employed,” Quesada told the Inquirer. 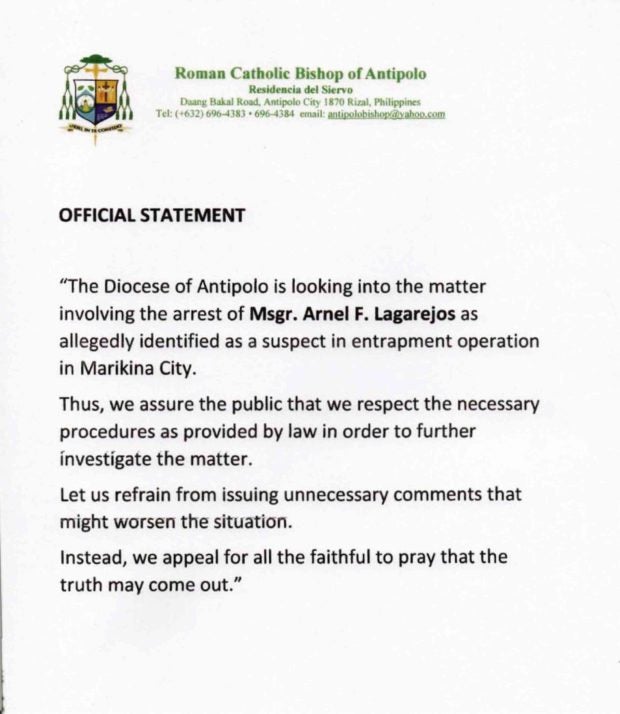 They finally found out who he was after some police officers  from Taytay town told them Lagarejos was their parish priest.

“Concerned citizens also told us that he was their priest,” Quesada said, adding that they used the information to verify his real identity.

A day before Lagarejos’ arrest, the girl and her mother went to barangay officials to file a complaint against him. At that time, neither the girl nor the pimp knew what he did for a living.

The girl, according to Quesada, complained that Lagarejos had pointed a gun at her and warned her against going out with any other men.

The police have yet to establish if Lagarejos owns a gun since no firearm was found in his possession during his arrest.

Meanwhile, the priest has been relieved of his duties pending a police investigation into the complaint against him.

The police and the girl’s mother have filed a complaint of human trafficking against him. He also faces possible criminal cases.

According to CBCP News, the official news service of the Catholic Bishops’ Conference of the Philippines, Antipolo Bishop Francis de Leon, Lagarejos’ superior, has stripped him of all his other positions in the diocese, including being president of Cainta Catholic College.

A check of the priest’s Linkedin account showed that he served as parish priest of the Our Lady of Abandoned Parish in Cainta, Rizal. He also has a doctorate degree in moral theology from the Pontifical Gregorian University in Rome.

“Alleged violations against the Anti-Child Abuse Law and Anti-Trafficking in Persons Act are serious allegations that have to be dealt [with] by the authorities accordingly,” the Antipolo diocese said in a statement.

It also assured the public that it “respects the necessary procedures as provided by law in order to further investigate this matter.”

Citing a police report, the diocese said that priest was arrested in an entrapment operation conducted supposedly to apprehend minors involved in prostitution.

Lagarejos was placed under arrest after he arrived at Blue Wave Mall in Marikina City on Friday evening where the entrapment was carried out.

At that time, he was there to meet with the girl, unaware that a police team and representatives of the Department of Social Welfare and Development (DSWD) were there to apprehend him.

The pimp and the girl are now in the custody of the DSWD while Lagarejos remains in detention. —With a report from Tina G. Santos