Cardinal Tagle finally gets special stole made by rag maker 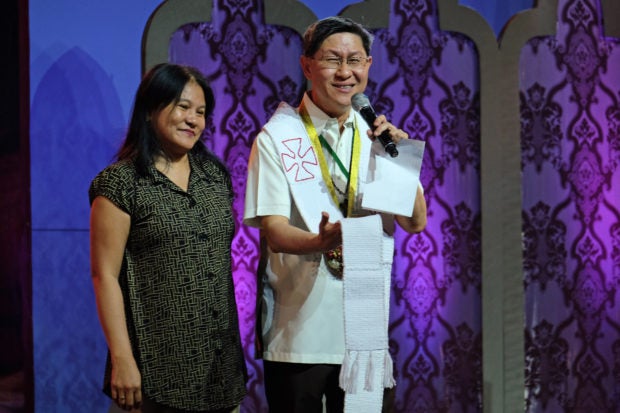 Manila Archbishop Luis Antonio Cardinal Tagle gets the special stole made by rag maker Cynthia Cabrera, on July 30, 2017, eight years after she made it for him. The presentation of the gift finally happened during the closing of the Philippine Conference n New Evangelization 4. (Photo courtesy of PCNE 4)

MANILA — Finally, after eight years, the special stole (a strip of fabric used as an ecclesiastical vestment) that Payatas resident Cynthia Cabrera made has reached its rightful owner.

During the closing of the three-day Philippine Conference on New Evangelization 4 (PCNE4), Cabrera was finally able to come face to face with Manila Archbishop Luis Antonio Cardinal Tagle and give him the stole which she made in 2009.

In front of around 6,000 people, Cabrera, a rag maker, went up on stage to place the white stole, which she made out of fabric remnants, over Tagle’s shoulders.

Tagle was not aware of Cabrera’s gift to him until he received a letter from her last December 22, 2016.

In her letter, which Tagle read to the audience, Cabrera reminded the cardinal, who was still a bishop at that time,  that they met in 2007 when he interviewed her in his gospel talk show.

She said Tagle then requested her to make him a stole out of fabric remnants.

But Cabrera was hesitant and told Tagle that using such materials would be quite heavy, to which the latter replied: “Hindi naman ikaw ang magpapasan, bakit ka mabibigatan (You’re not the one who will carry it, why will you feel burdened).”

“I think I really said that,” Tagle said, eliciting laughter from the crowd.

But Cabrera said she took Tagle’s request as a challenge and was able to create a stole out of remnants in 2009.

However, she decided to give it to another priest because she didn’t know how she would give it to Tagle.

But last December 21, 2016, Cabrera said she saw a Jesuit priest who celebrated mass in Payatas use the stole she made for Tagle.

“I told him that I made the stole for you (Tagle) but I did not know how to give it to you,” Cabrera told Tagle in her letter.

Cabrera said she was filled with hope when the priest told her that he would bring the stole to Jesuit Communications at the Ateneo de Manila University where Tagle shoots his gospel talk shows.

“I’m not sure if it will reach you but I hope you’ll like it,” Cabrera said.

“This stole was made out of remnants, made by people who sometimes feel they are discarded, scrap. But in the Eucharist, the pieces of bread become one in Christ,” Tagle said as he proudly wore Cabrera’s special gift to him.

Meanwhile, Tagle also urged the Filipino faithful to be open to accepting “wanderers” or those that appear to be going nowhere in life.

In his synthesis of the three-day PCNE4, Tagle said it would be good if people were open to providing guidance, instead of closing their doors, to those in need of guidance in life.

Only when one is guided in the right direction will he or she be able to turn his or her life into a journey desired by God, according to Tagle.  SFM