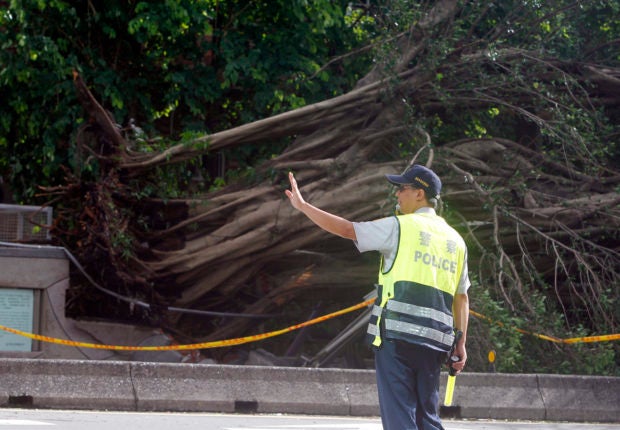 Taiwan was hit Sunday by its second major storm in two days after Typhoon Nesat (known in the Philippines as Gorio) battered the island, leaving at least 111 injured while causing flooding and widespread power outages.

Much of the island came to a standstill on Saturday after Nesat made landfall in the eastern county of Yilan, whipping up massive waves of over 49 feet (15 meters) and dumping up to 23 inches (58 centimeters) of rain in the southern region of Pingtung.

It moved away from Taiwan Sunday as Tropical Storm Haitang (known as Huaning in the Philippines) churned towards the south of the island and made landfall in Pingtung in late afternoon, said the Central Weather Bureau.

It is the first time in 50 years that Taiwan has issued warnings for two such storms together.

“Even though Haitang is gradually weakening, it is expected to bring heavy rain in central and southern Taiwan from tonight to tomorrow and we urge people to be on guard,” said forecaster Lin Ting-i.

More than 12,000 people have been evacuated since Saturday, with nearly 9,000 soldiers deployed for disaster relief.

Most train services were suspended and around 500 domestic and international flights cancelled or delayed during the weekend.

At least 111 people were injured, mostly by falling objects or car accidents while some slipped in the bad weather, according to the central emergency operation centre.

More than half a million households were without electricity as Nesat pounded the island with downpours and winds of up to 180 kilometers an hour.

Pingtung suffered the worst flooding as of Saturday night, with some 200 residents stranded but later rescued.

Around 60,000 households were still without electricity on Sunday though rail services had mostly resumed.

Two naval vessels anchored in the northern port of Keelung  were damaged when they were rammed by a cruise ship whose mooring cable snapped in strong winds.

Although Nesat was Taiwan’s first typhoon this year, the island was pounded by heavy rains last month.

Nesat made landfall at Fuqing city in China’s southeastern province of Fujian early Sunday, according to state media, with authorities issuing a red typhoon alert — the highest in China’s color-coded warning system.

Emergency response efforts have begun in neighboring Zhejiang province, where more than 3,000 people have been evacuated, the China News Service reported.

Another typhoon, dubbed “Begonia”, is expected to make landfall in Fujian either Sunday evening or Monday morning.