Till death do us part: Groom couldn’t make it to reception | Inquirer News
Close
menu
search

Till death do us part: Groom couldn’t make it to reception

The groom was in a blue barong, happiness shining through his eyes as his teary-eyed bride walked down the aisle. He was obviously in pain, but Clark Fudolig managed to stand tall and proud, having finally fulfilled his promise to give Millie Jane Tique a church wedding.

In her wedding vows, Millie, a human resource officer at the Department of Education’s main office in Pasig City, thanked Clark for making good on the promise he made years ago.

She also thanked him “for never giving up, for fighting back, for struggling to live.” She added: “I promise to love you and stay with you until the end.”

But Clark never managed to say his vows, nor could he kiss his bride. Barely making it through the rites at the University of the Philippines Diliman Parish of the Holy Sacrifice, the Fudolig couple had to rush to the Philippine Heart Center, where the groom died of pancreatic cancer shortly after.

The video of the couple’s July 12 wedding titled “Unconditional Love” and posted online by photographer Raymon John Orlanda and Mark Vitasa soon gathered thousands of “shares” and “likes” as netizens said it depicted what “forever”  and “true love” meant in these times of uncertainty and momentary dalliances.

It was a wedding that Millie, 37, had looked forward to since they got hitched in civil rites in 2004.

Days before the big day, she had patiently and diligently organized her dream wedding. She bought an RTW (ready-to-wear) wedding gown in Divisoria, contacted the suppliers, talked to caterers, photographers and videographers, and told them how her partner of 14 years would be using a wheelchair during the ceremony.

“I talked to and negotiated with the photographers so they’d be ready should we cancel the whole thing,” Millie said,  adding that she had even considered converting the booking into a funeral reception should Clark’s condition worsen.

Clark, 32, was diagnosed with pancreatic cancer in 2014, but it was only in May that Millie learned from her sister-in-law that Clark was dying very soon.

The groom barely had four weeks to live when he flew home to Manila from the United States where he had followed his parents as an immigrant and dreamed of bringing in Millie and their 12-year-old daughter Cane Krissie Jirmei.

A month later, Clark had to fly to the US to work as an air-con technician. He would visit his family every two years, sometimes staying as long as three months. Most of the time, however, the family bonded online.

The long distance relationship comforted them both and drew their daughter closer to her dad. “When he was home, they would have time alone to catch up,” Millie said.

Like most couples, they had their ups and downs, with Clark’s cancer posing the biggest challenge to their relationship, Millie said. She and her daughter applied for a US visa twice to take care of Clark, but were denied for having “no strong family ties.”

“We did not intend to stay in the US (but we were not given) humanitarian consideration,” Millie said. Pained by the thought of dying in the US without seeing his family, Clark decided to come home despite feeling very weak.

Millie took care of him without any hint of hurt or worry. “I tried to be strong. I did not show him I was giving up,” she recalled. “Those were the best days of our lives. We made the most of (the time we had left),” she said. 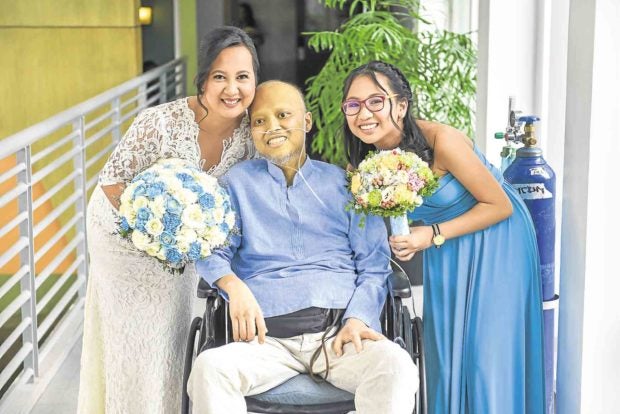 But there were moments when she questioned God, she admitted. “Why Lord? Why me? I’ve waited for this for so long, only for him to leave.”  Later however, she felt more reflective. “God has a purpose for this. God has a purpose for all of us. I learned about unconditional love. He showed me until the end what sacrifice and love really means,” she said. Women who undergo the same trial should be strong, she added.

Clark for his part was very apologetic about the situation. “I’m sorry. Had I taken good care of my body, we could have been together longer,” he told Millie.

But regrets gave way to pride on their wedding day when Clark, in pain and bald after several chemotherapy sessions, “still managed  to smile and radiate happiness and love for his family,” recalled Orlanda.

Every move was tortuous for Clark, even the mere act of breathing, recalled Millie.  They could have asked the priest to officiate the rites at the hotel instead, but Clark refused and said it was Millie’s dream to walk down the aisle and have a church wedding.

Their daughter Krissie was as proud: “My dad (was) so great. He made it. He did it, mom,” she said.

Days after, Millie said she felt comforted by the outpouring of support generated by the couple’s online video. “I did not mourn that much because the messages inspired and motivated me. It feels good to have inspired other people, too. I also want them to know how good my husband (was), how he had fulfilled his promise.”

To remember her husband, Millie had a henna tattoo of Clark on her left arm and plans to have it permanently inked on her.

“Clark knew I loved tattoos but he didn’t want one on me. I asked for his permission the last time we were together. And surprisingly, he agreed. Maybe he wanted me not to marry anymore,” Millie said, laughing.

“Well, I don’t have plans of remarrying. This is forever,” she said. 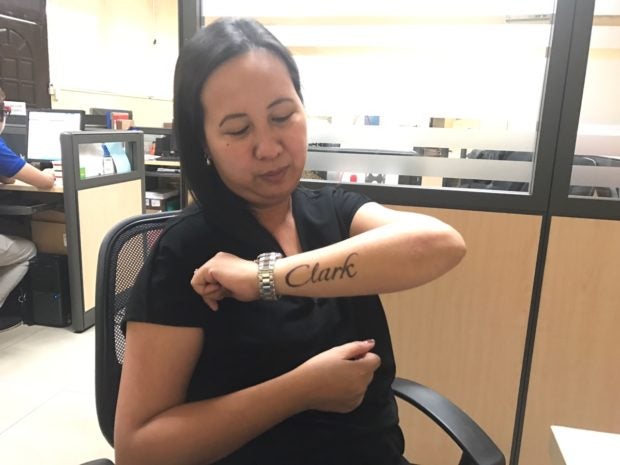 Millie Fudolig shows her Henna tattoo. This will soon serve as her permanent memory of her husband Clark. Clark and Millie chose the font for the hand tattoo. JODEE AGONCILLO